Kenya has joined the list of African states calling on Western powers to lift crippling sanctions on the post-Robert Mugabe’s Zimbabwe.

President Uhuru Kenyatta on Wednesday pledged to support the economically-struggling southern African nation’s bid to have the sanctions imposed by the US and the 28-member European Union (EU) lifted.

“Imposing sanction is like tying somebody’s hands and feet, they cannot move. We will give our support to bring back Zimbabwe to the global platform,” said Kenyatta in a statement.

The President, the statement said, spoke during a meeting with his Zimbabwean counterpart Emmerson Mnangagwa’s special envoy Perence Shiri at State House in Nairobi.

President Mnangagwa has made scrapping of the sanction a key plank of his diplomatic engagement with the African continent since he romped to power following last year’s acrimonious elections.

The West had imposed the sanctions during the long rule of Mugabe. 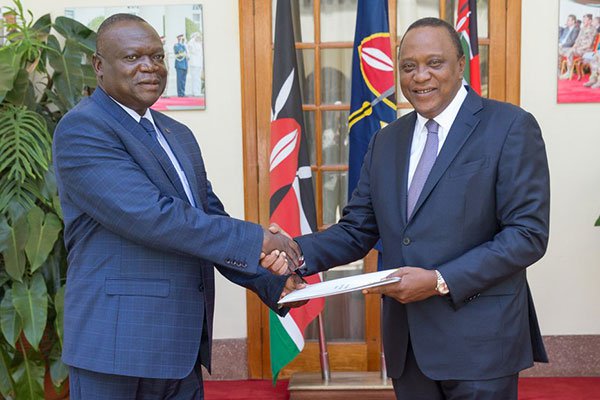 South African President Cyril Ramaphosa said on January 22 that he planned to meet Mnangagwa at a later date to work on a plan to pull Zimbabwe out of the sanctions, which have plunged the country into economic doldrums.

Alleged human rights abuses and flawed elections prompted many Western countries to isolate Zimbabwe in the early 2000s in the wake of a forced takeover of white-owned farms.

Shiri was in Nairobi to seek Kenya’s support in the campaign against the sanctions. This comes two days after Britain’s minister for Africa Harriett Baldwin reportedly said former Zimbabwe’s colonial master supports calls for the EU to extend the sanctions.

Baldwin further said her country would not back Zimbabwe’s plans to return to the 53-member Commonwealth after Mugabe withdrew membership in 2003.

The EU is due to meet later this month to review the bloc’s sanctions on Zimbabwe.

“Specifically with regard to sanctions…I think that since the recent developments there might be a case for widening it to include further individuals,” she was quoted as saying.

“We have been aware that the president has said that heads will roll. We haven’t seen any specific heads rolling.”

The US extended sanctions on Zimbabwe in March last year.