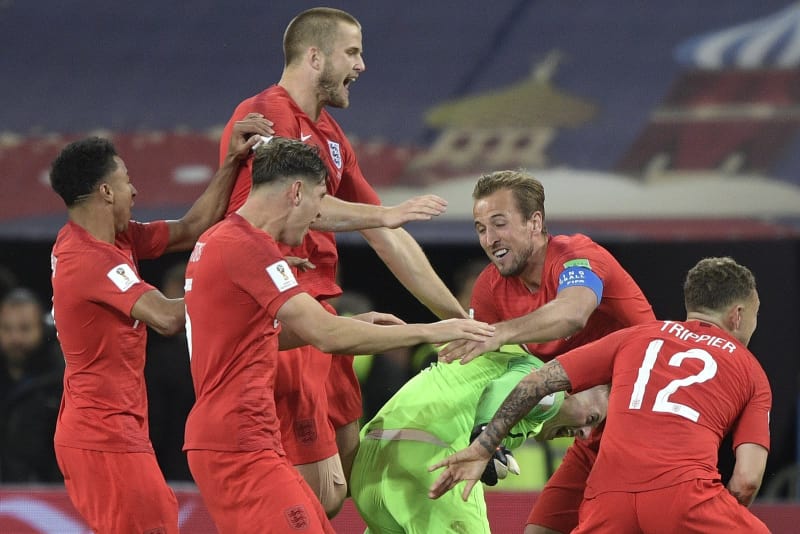 England held their nerve against Colombia to win their first ever penalty shootout in a World Cup and reach the quarter-finals in dramatic fashion on Tuesday.

Eric Dier scored the decisive spot-kick to win the shootout 4-3 and send Gareth Southgate’s young team through to a meeting with Sweden, who earlier beat Switzerland.

A bad-tempered match at Moscow’s Spartak Stadium that featured eight yellow cards — six for Colombian players — ended 1-1 after 30 tense minutes of extra-time, meaning the game had to be decided by penalties.

The South American side, without injured forward James Rodriguez, appeared on the edge of reaching their second consecutive World Cup quarter-final when Jordan Henderson’s effort was saved by Colombian goalkeeper David Ospina, keeping the score at 3-2.

But Mateus Uribe then rattled the crossbar and after Kieran Trippier levelled at 3-3, England goalkeeper Jordan Pickford saved from Carlos Bacca, extending his left arm to stop the ball as he dived to his right.

That gave England match point and Eric Dier made no mistake, beating the despairing dive of Ospina before he was mobbed by his teammates.

It is the first time England have won a shootout at a World Cup — and comes after six failures in seven attempts at major tournaments before Russia.

Southgate’s team were minutes away from victory during normal time but Yerry Mina rose to head home an equaliser from a corner and cancel out captain Harry Kane’s 57th-minute penalty.

The late, late goal deflated England and the momentum shifted visibly towards the South Americans, who started extra-time with a spring in their step.

“To get knocked down at the end like we did with that goal in added time, you know, it’s difficult to come back from that,” said Dier.

England, for so long under-achievers on the international stage, are the only former winners left in the bottom half of the draw and, with Sweden up next, will fancy their chances of reaching the semi-finals for just the third time in their history.

Pickford is the first England goalkeeper to save a penalty in a shootout at a major tournament since David Seaman at the 1998 World Cup against Argentina.

“It gives us belief to go into the Sweden game.”

Kane’s penalty in the first half made him the tournament’s top scorer with six goals, two clear of Belgium’s Romelu Lukaku.

Brazil and France lurk in the top half of the draw but Lionel Messi’s Argentina and Cristiano Ronaldo’s Portugal are out.

Even Prince William got caught up in the emotion, tweeting: “I couldn’t be prouder of @England – a victory in a penalty shootout! You have well and truly earned your place in the final eight of the #worldcup.”