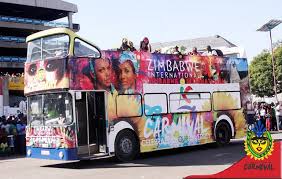 Preparations for the 2018 iflix Victoria Falls Carnival have gotten off to a bad start after organisers of the Vic Falls Party Bus announced they were suspending the experience this year.

The Vic Falls Party Bus was introduced in 2016 and had become a crowd puller for the annual carnival as party lovers who enjoyed loud high definition music, braai and adventure all in a bus from Harare to Victoria Falls over two days.

The party bus had in the past two years played curtain raiser to the carnival as scores would arrive in the resort town on December 29 in time for the bush party.

However, in a statement, the organisers of the Vic Falls party bus, Enthuse Afrika could have done a blow to carnivalistas not only from Harare but also from the region who loved driving by bus with DJs entertaining them with music all the way, with tshisanyama in Gweru and breakfast in Hwange.

Enthuse Afrika co-founder Stephanie Kapfunde said in a statement that the suspension is temporary and does not signify the end of the party on wheels.

“Enthuse Afrika, the organisation behind the Vic Falls party bus has decided to sit out their famous ride this year. It really is a bombshell to all our patrons; we know it’s disappointing but we have decided that although we have been at this successfully for two years, we would like to take 2018 out to work on how we can amplify the experience for our party lovers,” said Kapfunde.

She said she was not scared of losing the market by being absent from the picture as the party on wheels had already established itself as a brand.

The Vic Falls party bus is the biggest and most unforgettable party on the wheels experience as to Victoria Falls every December to kick-start the three-day carnival.

Last year it was sold out in Harare and Lusaka Zambia as more people paid for it.

For $450, one will have accommodation on bed and breakfast for the duration of the carnival, a sunset booze cruise as well as entry pass to the carnival for the whole period.

Ordinary carnival tickets cost between $60 and $90 per day excluding accommodation and tour activities.