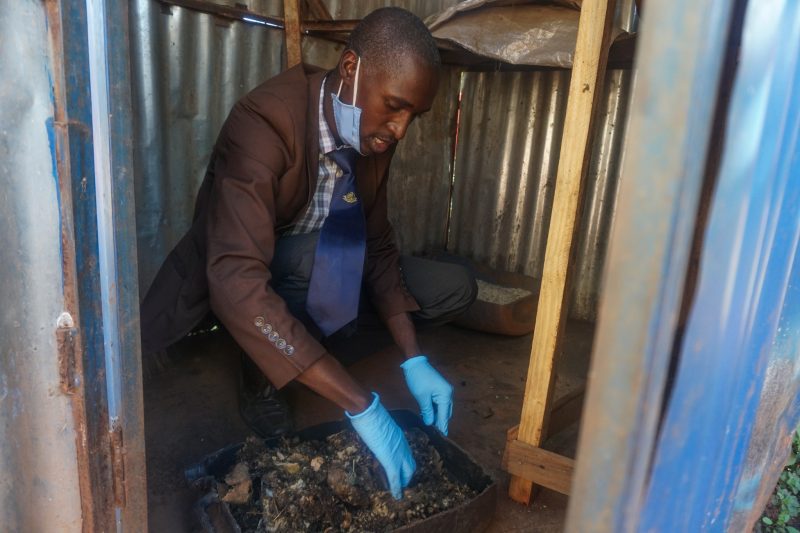 Josphat Nyika demonstrates how maggots can be crushed and mixed with ingredients like maize to reduce the cost of feeding livestock.
Spread This News

BINDURA: Dressed in a blazer and tie, Josphat Nyika isn’t an archetypal farmer. The deputy headmaster, fresh from teaching at the local primary school, dons a pair of plastic gloves and scoops up a swarm of crawling black maggots.

“People think maggots or flies smell,” says the 36-year-old, a tall and lean father of two in Bindura, a small valley town in northern Zimbabwe. “They don’t.” Convincing his wife otherwise was the first hurdle. The second was sourcing the black soldier flies he needed to launch the enterprise from neighboring South Africa.

But Nyika loves a challenge. Two years ago, he graduated with a degree in agriculture alongside teaching. When he couldn’t get funding for further research into maggot farming, he plowed ahead alone.

And in 2019, Nyika became the first Zimbabwean granted a license to import the fly he thinks will revolutionize farming by offering a cheaper protein for livestock.

Thousands of them now buzz in a white fishnet enclosure in his backyard. He calls it the “love cage.” When they mate, the female flies lay eggs, which Nyika transfers to a separate tin container, where they hatch into maggots and feed on decaying waste. Within days, the maggots can be fed live to fish, chicken and pigs, or dried and pulverized into fodder.

“Maggots can change the feed industry and reduce costs associated with rearing livestock like poultry, a form of subsistence for many in the country,” says the teacher-cum-entrepreneur, who is now known locally as VaNhunzi, or Mr. Flies.

Since the 1950s, livestock feed in Zimbabwe has relied on soya (also referred to as soy) for protein. But soya bean production has declined dramatically in recent years, dropping by nearly 70% from 2000 to 2015.

High production costs, inefficient farming practices and inadequate infrastructure investment are to blame for the low yields and the steep price of soya, according to the Zimbabwe Economic Policy Analysis and Research Unit, an independent research institute.

Maggot farming is gaining momentum as a potential alternative. While there are no precise figures, experts such as Victor Marufu from the Zimbabwe Organic and Natural Food Association say the number of maggot farmers is growing.

He believes maggots will reduce feeding costs for livestock farmers by as much as half. “Unlike soya, maggots do not need huge land size or chemicals and a lot of water,” he says.

“A small piece of land, flies and waste, the critical ingredient, are all one needs to begin.”

In a village just outside the Zimbabwean capital of Harare, Andre Hoffman is setting up his first maggot farm.

“Maggots are a game-changer in stock feed,” says the fish and chicken farmer. It costs him $3.50 to breed a bird on maggots, compared to $6.50 using soya-based feed.

“In addition to maggots being an exceptionally high source of protein, the chickens also taste better,” Hoffman adds.

But a lack of knowledge and innovation in the agriculture sector has slowed the uptake of maggot farming, say supporters of the shift.

Maggot farmers are not producing enough to transform the feed industry, says Matthew Nyakudya, a poultry and egg farmer in Bindura. After finding maggot feed “more effective,” he has decided to set up his own production line with the help of maggot-farm pioneer Nyika.

“There’s [also] still the ‘yuck’ factor with maggots,” says Marufu of the natural food association. “People think they are disgusting, so many are still shunning the industry.”

The government could play an important role, he suggests, by educating the public about maggots and investing in their farming.

“Maggots can change the feed industry and reduce costs associated with rearing livestock like poultry, a form of subsistence for many in the country,” Josphat Nyika.

He agrees that “there are huge opportunities” in the trade but says one challenge to increasing production has been the availability of the starter black soldier fly. “There are limited reliable suppliers of the breeding colony,” he says.

But some maggot entrepreneurs say the fly is available in Zimbabwe too – if you know where to look.

“Most people just don’t know how to harness it,” says Joseph Marova, a 25-year-old agricultural studies graduate who began farming maggots last year. “If you go to a dump site, you can find [the fly] there. I have trapped it there myself.”

From a pair of containers squeezed into his family’s garden, he produces 100 kilograms (220 pounds) of maggots per day during the warm summer months maggots prefer. He uses them to feed around 1 000 chickens at his suburban farm. Maintaining production during the cold season is harder, says Marova, who plans to build a greenhouse next year as a solution.

Nyika is expanding his maggot business while trying to grow the wider industry too. Last year, he began teaching aspiring farmers in Zimbabwe and further afield, with students joining online classes from South Africa and Europe.

In the United Kingdom and South Africa, maggot farming has already gained traction as a way to meet farming needs in a changing climate. Some scientists also advocate the use of maggots as food for humans, to combat global malnutrition in a future where environmental disasters and epidemics could threaten supply chains.

“We want to contribute to climate-smart agriculture,” says Nyika, who hopes to find new markets for his maggots in the coming months.

He points to the bottles of feed he is preparing for customers. Their labels say, “The Future Is the Fly; The Future Is Now.”