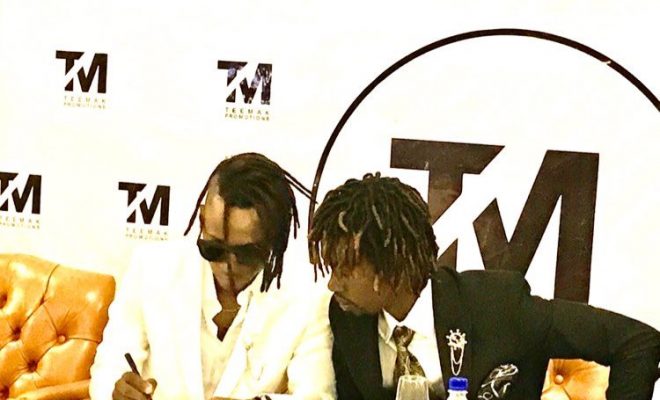 The deal estimated to be hovering around US$100 000 is believed to be the biggest so far in the music industry courtesy of Malaysia-based Zimbabwean young businessman and finance expert Teemak.

Speaking at the signing ceremony, Teemark, said the deal would benefit Enzo Ishall more than him.

He insisted that he was looking at empowering the youths through Enzo Ishall.

“If I wanted money I know where to get it and believe me I am into finance,” Teemak said.

According to Teemak they were aiming at building Enzo Ishall a big brand with help of a number of creative and experts in the music industry.

In that regard Enzo Ishall will have a sound management from show promoters, local and international agents, social media experts as well as publicist.

Part of the contract would see Enzo Ishall collaborating with some of the best talents on the continent the likes of Diamond Platinumz.

Over and above this, Enzo Ishall awaits for his big break internationally which he said was always his childhood dream.

“This whole signing deal came after I confided in Teemak that I want to my music outside of Zimbabwe where not only Shona speaking fans understand.

“So Teemak and I agreed to work together and ensure that we build the brand together,” he said.

Turning to his fallout with Prophet Passion, the clergyman who allegedly once signed him, Enzo Ishall insisted he didn’t have a contract describing it as charity work.

“Passion is my brother and whatever he did he did it out of his own volition. He is a philanthropist and I am pleased to say he supported me in this journey and unfortunately that journey has ended.

“The same goes out to my brothers Fantan, Levels and Ribhe from Chillspot. I want to continue working with them and other local producers Oskid and DJ Tamuka,” he said.