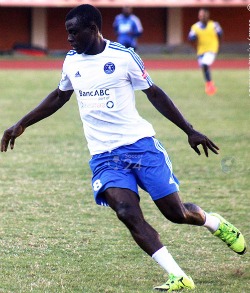 CAMEROONIAN Christian Epoupa scored a memorable brace to propel Dynamos to a 2-0 victory over Caps, their first since 2014.
Epoupa scored on the stroke of halftime finishing off a rebound after an initial Denver Mukamba effort was blocked by Stephen Makatuka.
He completed his brace fourteen minutes from full time heading home unmarked from an Ocean Mushure free kick. He now has 10 goals on his season tally, jointly on top with Bukhosi Sibanda of Bantu Rovers.
Caps United protested vehemently that the free kick was a soft one after Moses Muchenje brought Mushure down.
Dynamos started the match on a rampage with Epoupa and Gift Saunyama failing two convert glorious chances.
Caps United, who were playing too deep, had their first chance on the 37th minute when Tafadzwa Rusike found himself unmarked on the left but hit the side netting.
Dynamos started the second half on the offensive like they did in the first.
An attempt by Caps United coach to change the game through substitute Moses Muchenje didn’t pay off as Dynamos remained resolute and hung on to the win.
Dynamos are now second on the log, three points behind Chicken Inn.
Elsewhere, Chapungu grabbed the bull by its horns when they handed Highlanders their fourth consecutive defeat. Brighton Mungoni’s goal was all Chapungu needed to collect the maximum points.
At the Colliery, FC Platinum eased to a slander 1-0 win.
They are now third while Ngezi Platinum Stars, who lost to Shabanie, fell to fourth position. Admire Dzumbunu scored for the Chinda Boys to give his team hope of escaping the relegation zone.
Results:
Highlanders FC 0-1 Chapungu FC
Shabanie Mine FC 1-0 Ngezi Platinum FC
Hwange FC 0-1FC Platinum
Caps United FC 0-2 Dynamos FC
Advertisement