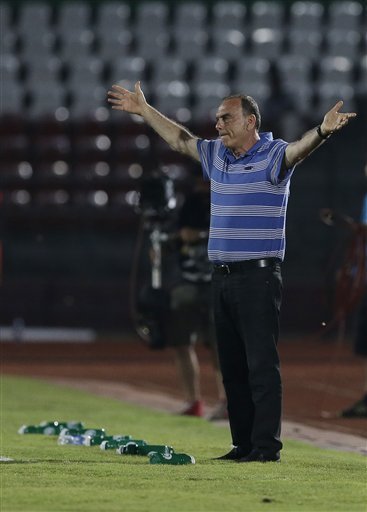 EQUATORIAL Guinea have been fined $87,000 after their fans sparked a riot in the Africa Cup of Nations semi-final against Ghana on Thursday.
Ghana were closing in on a 3-0 win over hosts Equatorial Guinea at the Estadio de Malabo on Thursday evening, when celebrating away fans were forced to flee the stands after being pelted with bottles.
The host nation will be able to play their third-place play-off match as usual, but have been warned that any further trouble will mean that they will have to play their next match behind closed doors.
In addition to the fine, Equatorial Guinea will also have to pay all medical bills for anybody hurt at the match.
The Ghana Football Association’s Twitter feed described the scene as being “like a war zone” as a police helicopter hovered over the ground, while the head of the Ghanaian FA feared supporters would be killed in the violence that marred the second semi-final of the tournament.
Ghana FA president Kwesi Nyantakyi told the BBC World Service on Friday: “We’re lucky we haven’t lost any lives, though people have sustained injuries arising from objects thrown at them.”
A horrifying array of items were picked off the pitch, with a BBC reporter taking a picture of what appeared to be a small rock, half a dining plate, and a jagged shard of mirror.
Nyantakyi told BBC World Service: “African football has grown beyond this level and in the 21st century we expect to see more decency in the behaviour of fans.
“A high-profile game of this nature should have attracted police, intelligence officers and military.
“I couldn’t have counted 50 policemen at the stadium, the rest were from Angola, who were not familiar with the terrain, so they didn’t know how to handle the situation. So the Ghanaian fans were left at the mercy of these violent fans.”
The match was suspended for around half an hour as Ghana supporters took refuge behind one of the goals, out of range of most missiles. It eventually resumed and Ghana completed their victory, setting up a final against Ivory Coast on Sunday.
There were reports of tear gas being fired into the stands in a bid to control the Equatorial Guinea fans, while home players also attempted to quell the trouble by appealing for their supporters to calm down.Advertisement

A tweet from the Ghana FA’s official account during the match said: “Police helicopter hovers above the pitch with the #Ghana fans in real danger. It’s now like a war zone. #AFCON2015”.
Jonathan Mensah, who played in the match for Ghana, labelled the violent scenes “unacceptable” for any environment.

He wrote on his personal website on Friday: “It was really an ugly sight. It has been a great tournament so far without any major problems.
“It’s unacceptable for such things to occur anywhere in the world let alone in a football stadium. I hope all fans are safe and my thoughts are with those who have sustained any injuries.”
Equatorial Guinea stepped in to host the tournament at the 11th hour after Morocco pulled out due to fears regarding the Ebola epidemic.
Equatorial Guinea face a third-place play-off against DR Congo in the same stadium on Saturday, with Ghana and Ivory Coast contesting the final in Bata on Sunday.