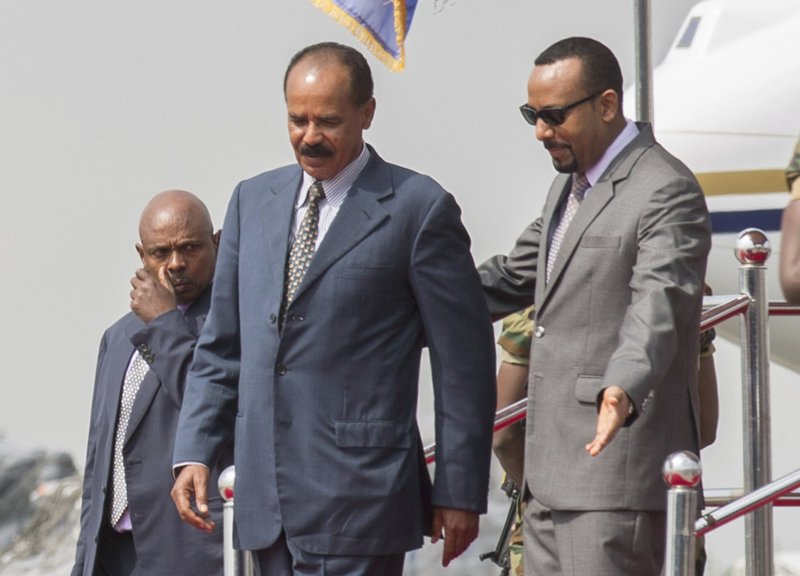 Eritrean President Isaias Afwerki pledged to resolve his country’s dispute with Ethiopia on Saturday in a historic visit to Addis Ababa aimed at cementing peace less than a week after the nations declared an end to two decades of conflict.

Isaias arrived in the Ethiopian capital just five days after Ethiopian Prime Minister Abiy Ahmed visited Eritrea as part of a dizzying peace process aimed at ending years of violence and animosity between the neighbours who were once part of the same nation.

Abiy and Isaias shared laughs and hugs at an official lunch on Saturday as the Ethiopian leader said his counterpart was “beloved, respected and missed by the Ethiopian people.”

“We are no longer people of two countries. We are one,” Isaias told political and cultural figures gathered in a palace built during Ethiopia’s imperial days. “We’ll go forward together.”

Isaias started his three-day visit at Addis Ababa’s airport, where he and Abiy strode down a red carpet as a brass band played and traditional dancers cheered.

The leaders then drove into the city on a road lined with thousands of people dressed in white shawls and waving palm fronds as Ethiopian and Eritrean flags flew side-by-side from lampposts.

There were also banners and pictures of the two leaders who on Monday signed a declaration declaring an official end to the war.

Later in the day, the two leaders flew to the southern city of Hawassa where Isaias toured an industrial park that’s key to Ethiopia’s economy.

Eritrea was once part of Ethiopia and comprised its entire coastline on the Red Sea until it voted for independence in 1993 after decades of bloody conflict.

The move left Ethiopia landlocked, and the deterioration of relations after the outbreak of the war in 1998 forced Addis Ababa to channel its foreign trade through Djibouti.

The two countries showed little sign of rapprochement since the signing of the Algiers peace agreement in 2000 after a conflict which left 80,000 people dead before settling into a bitter cold war.

Ethiopia’s Prime Minister Abiy Ahmed, on the left, and Eritrean President Isaias Afwerki signed a declaration ending the state of war between the two countries on July 9

Analysts say the surprisingly rapid burying of the hatchet was possible only because of Abiy’s ascension to the post of prime minister in April.

As part of a whirlwind set of reforms, Abiy announced last month that Ethiopia would abide by a 2002 UN-backed ruling and hand back disputed border territory to Eritrea, including the flashpoint town of Badme.

However Ethiopia has not announced the pull-out of troops from the area.

Abiy then paid a historic visit to Eritrea, where the two leaders announced the re-establishment of diplomatic and trade ties that could mean big benefits for both nations, and the wider Horn of Africa region, plagued by conflict and poverty.

The emotional reunion between the two countries has allowed residents to speak to each other by telephone for the first time in two decades as communication lines were re-opened.

Direct flights are due to start next week.

“Can one find appropriate words to describe the intensity of popular emotions that has gripped both countries; the depth and significance of the promising changes underway in the region!” Eritrean Information Minister Yemane Gebremeskel said on Twitter after Isaias arrived.

A state dinner in his honour will be held on Sunday.

Eritrea and Ethiopia are both among Africa’s poorest nations.

However, Ethiopia has seen double-digit growth in recent years and is seeking wider options for importing goods and exporting from its nascent manufacturing industry by eyeing ports in Somalia and Eritrea.

Meanwhile Eritrea, one of the world’s most isolated nations, has pursued policies that have hamstrung the economy by scaring off investors, including an indefinite military conscription programme the UN has likened to slavery.

Amnesty International said Saturday that the newfound peace should be a catalyst for change in Eritrea, where thousands of people, including rights activists and opposition politicians are “languishing in detention simply for expressing their views.”

“The end of hostilities with Ethiopia is a joyous moment for Eritreans, but it must be followed by tangible reforms that make a real difference in the daily lives of the people and put an end to decades of repression in the country,” said Seif Magango, AI’s deputy director for the region.

In a statement he said Eritrea was the biggest jailer of journalists on the continent, and that its last independent media house was shut down 17 years ago.

Amnesty also called for an end to forced military conscription, seen as a key driver of the departure of hundreds of thousands of Eritreans from their country.