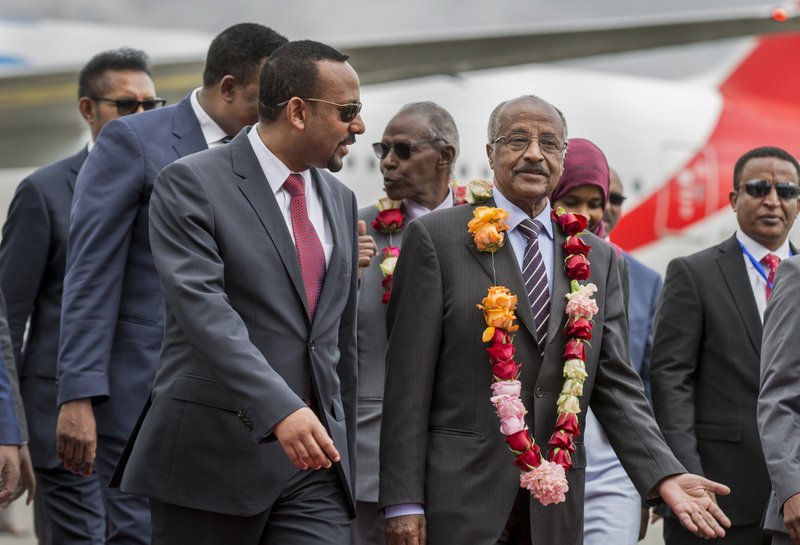 ADDIS ABABA: The leaders of Ethiopia and Eritrea will meet “soon” amid a surprising diplomatic thaw between the rival nations, Ethiopia’s top diplomat said Thursday, as an end to one of Africa’s longest-running conflicts appeared to move closer.

The meeting will “create a fertile ground to restore peace,” Foreign Minister Workneh Gebeyehu told The Associated Press. “Details regarding the location and timing are under discussion.”

The minister spoke as an Eritrean delegation led by Foreign Minister Osman Saleh concluded a historic three-day visit to Ethiopia, the first in two decades. The countries broke off relations when a border war began in 1998, five years after Eritrea won independence from Ethiopia, and their leaders haven’t met since signing a 2000 peace deal in Algeria.

The meeting would bring together Ethiopia’s reformist new prime minister, who took office in April, and the president of one of the world’s most reclusive nations.

Ethiopian Prime Minister Abiy Ahmed surprised the region earlier this month by fully embracing the 2000 peace deal that ended the war that killed tens of thousands. Ethiopia had refused to accept the deal’s handing of key locations to Eritrea and the countries have skirmished over the years.

Eritrean President Isaias Afwerki, who has been in power since independence, noted the “positive signals” and sent the delegation, saying it would “gauge current developments directly and in depth” and plan future steps.

In a highly symbolic move on Tuesday, Abiy greeted the Eritrean delegation at the airport as they were draped with necklaces of flowers. “We have tried war and found it useless,” he told a dinner reception that night at the National Palace.

Ethiopian Airlines will soon begin flights to Eritrea, Abiy said, adding: “We want our brothers and sisters to come here and visit us as soon as possible.” The delegation also visited a new industrial park in the southern region’s capital, Hawassa, a reminder of Ethiopia’s status as one of the world’s fastest-growing economies.

“Honestly speaking, I have found Prime Minister Abiy a wise leader. We want to live with our Ethiopian neighbors as one people,” said the special adviser to Eritrea’s president, Yemane Gebreab.

The Eritrean delegation’s visit is welcome as “a first concrete step in the process of normalizing relations between the two countries,” the spokesman for the U.N. secretary-general said in a statement Thursday, saying the moves to ease tensions will have far-reaching effects in the East Africa-Horn of Africa region.

In a sign of the new effort at dialogue between the rivals, at least one Eritrean diplomat, its ambassador to Japan, publicly condemned Saturday’s grenade attack on a huge rally in Addis Ababa shortly after Abiy addressed the crowd.

Two people died and more than 150 were hurt in the blast, while Ethiopia’s ruling party blamed “desperate anti-peace elements” and vowed to continue with sweeping political and economic reforms in Africa’s second most populous country.

Not everyone cheered Ethiopia’s embrace of the peace deal. Some Ethiopians in the north near the Eritrean border held protests. And the Tigrayan People’s Liberation Front, a party in Ethiopia’s ruling coalition that has been the dominant force in government for most of the past 27 years, said the announcement had been made before the ruling coalition’s congress met to discuss it.