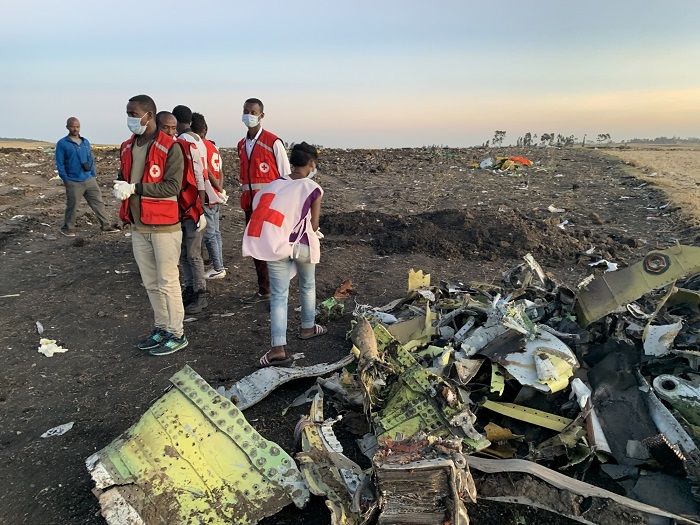 Debris from the Ethiopian Airlines crash site
Spread This News

PILOTS flying Ethiopian Airlines Flight 302 initially followed emergency procedures that were laid out by Boeing before the plane nose-dived into the ground, according to preliminary findings reported in the Wall Street Journal.

Citing unnamed sources familiar with the investigation, the WSJ reported that despite following the steps, which included turning off an automated flight-control system, pilots could not regain control of the Boeing 737 MAX 8.  CNN has not been able to confirm details of the report.

Earlier this month, the Federal Aviation Administration agency grounded all Boeing 737 Max planes, saying it had identified similarities between the Ethiopian Airlines crash and the Lion Air crash in Indonesia six months earlier.

Ethiopian Airlines Flight 302 crashed the morning of March 10 after taking off from Addis Ababa on its way to Nairobi, Kenya, killing all 157 people on board.

Lion Air Flight 610 crashed into the Java Sea in Indonesia on October 29 after taking off from Jakarta. All 189 people on board died.

If confirmed, the findings reported in the Wall Street Journal suggest that following emergency procedures in the Boeing handbook may not have been sufficient enough to prevent a crash.

The reported findings come from a preliminary report that’s required by the investigating authority to be produced within 30 days of an incident. The findings are not final and subject to change as the investigation continues.

The MCAS is a system that automatically lowers the nose of the plane when it receives information from its external angle of attack (AOA) sensors that the aircraft is flying too slowly or steeply, and at risk of stalling.

In the Lion Air crash, the MCAS forced the plane’s nose down more than 24 times before it finally hit water, according to a preliminary investigation by Indonesia’s National Transportation Safety Committee, which also found the system was responding to a faulty sensor.

US pilots who fly the Boeing 737 Max have also registered complaints about the way the jet has performed in flight, according to a federal database accessed by CNN.

Investigators have pointed to whether pilots had sufficient training with the system.

According to Ethiopian Airlines CEO Tewolde GebreMariam, pilots transitioning to the Boeing 737 Max 8 aircraft from older 737 models were required only to undertake a short computer-based training program prescribed by Boeing and approved by the FAA.

GebreMariam also said the flight simulator that pilots trained on to learn how to fly the Boeing 737 Max 8 plane did not replicate the MCAS automated feature that crash investigators are scrutinizing.

Pilots’ union spokesmen for Southwest and American said the self-administered course — which one pilot told CNN he took on his iPad — highlighted the differences between the Max 8 and older 737s, but did not explain the MCAS feature.

Boeing has said it is working on a software fix for the 737 MAX jets but the FAA said on Monday that the company concluded “additional work” is needed.

“The FAA expects to receive Boeing’s final package of its software enhancement over the coming weeks for FAA approval,” the agency said in a statement. “Time is needed for additional work by Boeing as the result of an ongoing review of the 737 Max Flight Control System to ensure that Boeing has identified and appropriately addressed all pertinent issues.”

On Tuesday, a new Senate investigation was launched after whistleblower reports raised questions about whether FAA inspectors who reviewed the Boeing 737 MAX for certification were properly trained.