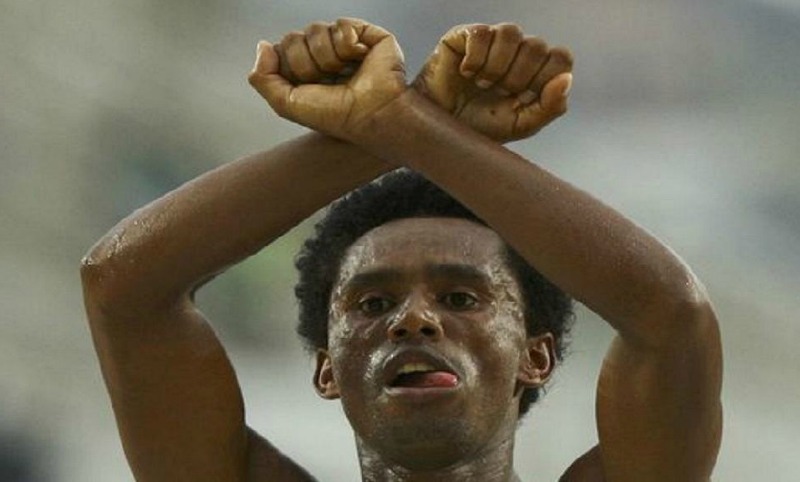 Ethiopian marathon runner Feyisa Lilesa, a 2016 Olympic silver medalist known for his anti-government protest when crossing the finish line, returned home on Sunday after more than two years in exile.

The runner was welcomed Sunday morning at Addis Ababa airport by several senior Ethiopian officials, including Foreign Minister Workneh Gebeyehu, and welcomed the changes noted in Ethiopia since the appointment in April of Reform Prime Minister Abiy Ahmed.

“There has been quite a change in the country,” he told reporters. “Now people can freely express their opinions and freely condemn the government.” “My sympathy goes to the martyrs who sacrificed their lives and gave me the freedom to come to my country and join my family.

He also said he was open to the idea of representing his country again in international races. “I want to go back to my previous performances, I am confident that I will achieve good results for my country and for myself.

Feyisa Lilesa, 28, had been living in exile in the United States in Flagstaff, Arizona, since 2016. He had chosen exile after his symbolic gesture, saying he feared for his safety if he returned home.

In Rio, he had symbolically crossed his wrists above his head as he crossed the finish line of the Olympic marathon, as if they were tied up, taking up a gesture used in the unprecedented anti-government demonstrations that Ethiopia was then the scene of.

The marathon runner, whose strong gesture had made the headlines all over the world, wanted to protest against the brutal repression of the demonstrators of his ethnic group, the Oromos, the country’s main ethnic group, whose region (south and west) was the epicentre of the protest movement.

But since April, for the first time in Ethiopia’s political history, the country has had an Oromo Prime Minister who has taken a series of measures to ease tensions in the country.

Prime Minister Abiy Ahmed lifted the state of emergency, released political prisoners and removed the Oromo Liberation Front (OLF) from the list of terrorist organizations. He also criticized the brutality of the security forces, began to open up the democratic space, and sealed peace with neighbouring Eritrea after 20 years of war.

However, inter-community violence, most often with territorial issues, marked the first months of Mr. Abiy’s mandate.