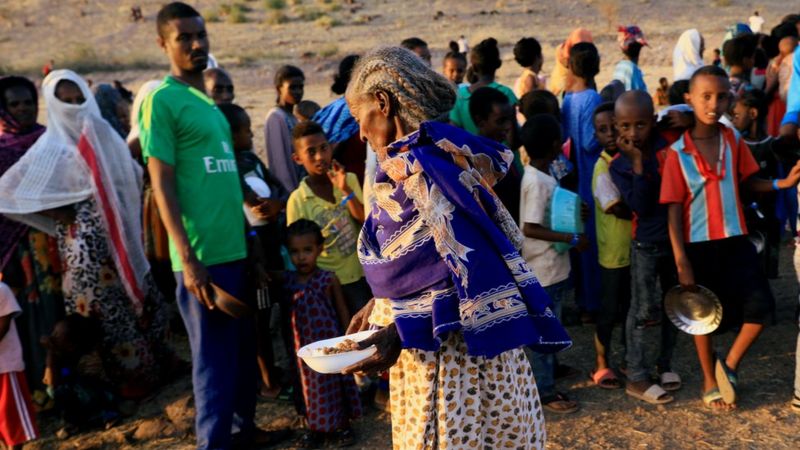 Aid agencies are preparing for up to 200,000 people to arrive in Sudan from Ethiopia in the coming months
Spread This News

AID id agencies are calling for an immediate temporary ceasefire in northern Ethiopia to allow aid to reach civilians affected by fighting.

The UN wants humanitarian corridors set up after two weeks of conflict between Ethiopia’s military and forces backing the leadership in the Tigray region.

Hundreds of people are reported to have been killed in the clashes.

On Friday Ethiopia’s government said it had captured the city of Aksum and the town of Adwa.

The government said that forces battling its military in both areas had “surrendered”.

However, the claims have not been independently verified and information is difficult to confirm because phone and internet connections have been down since the beginning of the conflict.

Aksum is one of the largest cities in the Tigray region and the mountainous town of Adwa is also considered strategically important.

Earlier this week, central government forces seized two other towns in Tigray – Shire and Raya – and Prime Minister Abiy Ahmed said his army was advancing on the Tigrayan capital, Mekelle.

Ethiopia has so far rejected calls for talks over the crisis, seeing its operation as internal “law enforcement”.

When Mr Abiy postponed a national election due to coronavirus in June, tension escalated between the two sides. The TPLF sees the central government as illegitimate, arguing that Mr Abiy no longer has a mandate.

How bad is the situation?

Aid agencies have no access to the conflict zone, but they fear that thousands of civilians may have been killed since fighting erupted at the beginning of November.

At least 33,000 refugees have already crossed Ethiopia’s border into Sudan and the UN refugee agency has said it is preparing for up to 200,000 people to arrive over the next six months if the fighting continues.

On Friday, the TPLF was accused of firing rockets into the city of Bahir Dar in the neighbouring Amhara region. The Amhara government said there were no casualties and no damage caused.

But the reported incident in Amhara, which has a long-running border dispute with Tigray, has raised concerns that the conflict could extend into a wider war after regional forces were sent to support federal troops.

Meanwhile, the UN has raised concerns about the influx of refugees into Sudan, which it says could destabilise a nation already supporting about a million people displaced from other African countries.

The refugees arriving in Sudan, the majority of whom are believed to be children, are hungry and frightened, aid agencies say, and an immediate ceasefire would allow them to help thousands of civilians still trapped inside Ethiopia.

A researcher for the human rights organisation Amnesty International in Ethiopia, Fisseha Tekle, said the conflict must be conducted in accordance with international law, which requires the protection of civilians “including access to humanitarian services”.

“As much as possible, human rights organisations, like Amnesty, should be given access to monitor the human rights situation,” he said.

Aid agencies are appealing for $50m (£38m) for food and shelter for the new arrivals.