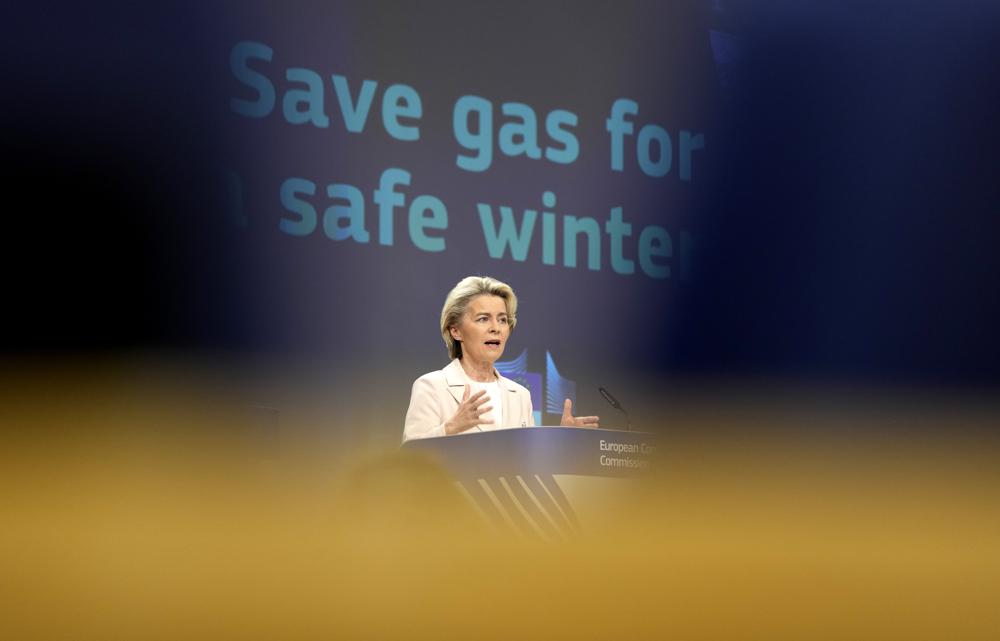 BRUSSELS: European Union leaders enter a crucial stretch this week to make sure runaway energy prices and short supplies don’t further tank their struggling economies and foment unrest. At the same time, they need to keep all 27 members united in their opposition to Russian President Vladimir Putin.

Leading up to Thursday’s start of a key summit, the European Commission, the bloc’s executive branch, proposed a blueprint on Tuesday that needs to reconcile the yawning gap between those who want to impose a common gas price cap to keep prices down and those who think it would primarily keep out supplies, further starving industries and businesses.

Then, going into the weekend, EU leaders will seek a compromise during two days of talks, however hard that may be. As a sweetener, the European Commission also proposes to retarget some 40 billion euros in budget aid towards those most affected by the crisis.

European Council president and summit host Charles Michel told the 27 leaders in his invitation letter that there were three lines of action: reducing demand, ensuring security of supply and containing prices.

“Europe is facing its week of truth,” Belgian Prime Minister Alexander De Croo said. “This week it is hit or miss.”

It didn’t take long for EU member countries to realize that the bloc’s dependence on Russian energy was a huge political error after Putin invaded neighboring Ukraine on Feb. 24 and natural gas prices skyrocketed. Amid sanctions imposed on Russia’s energy sector, the wealthy bloc of 450 million has since been struggling to find ways to keep freezing temperatures from entering the homes of the poorest and businesses from going down for lack of affordable energy.

With nationalists and right-wing populists complaining ever more about the EU’s common approach, the ability to find a joint exit strategy from the crisis could have a direct impact on the bloc’s future.

“The coming winter could freeze and shatter European sentiment — the shared sense of belonging, mutual trust among European countries, and citizens’ emotional attachment to the idea of Europe,” said Pawel Zerka of the European Council on Foreign Relations.

Even De Croo, leader of one of the most EU-embracing nations, knows there is no more time to waffle. “The time for excuses has gone. if the EU still wants to be meaningful, contain energy prices and better protect families and businesses in this energy war, it finally has to deliver,” he said.

De Croo has been pushing hard in recent weeks to cap the cost of all gas imports to the EU, with other countries like Poland and Greece also increasing the pressure on the European Commission.

The body tried to find a common ground between juggernaut Germany, which doesn’t back a full gas price cap, and other countries which are convinced such a cap won’t lead to a decline of offer on the market.

The European Commission proposed a compromise that would allow for a temporary correction mechanism to kick in in exceptional circumstances, and the creation of a new LNG gas index better reflecting the market following the drastic reduction of imports of pipeline gas from Russia.

If any prodding was needed, the International Energy Agency did it early this month by saying that “Europe’s security of gas supply is facing unprecedented risk as Russia intensifies its use of natural gas supplies as a political weapon.”

Even if hoarding of gas supplies has gone full thrust ahead and reliance on Russian provisions has dwindled to less than 10 percent, dangers still lurks.

“The possibility of a complete cut-off in Russian gas deliveries cannot be dismissed ahead of the 2022/23 heating season — when the European gas system is at its most vulnerable,” the IEA said.

And the energy crisis is ripping deep into the fabric of European society. The ETUC European trade union group said that wages adjusted for inflation have fallen in every EU member state this year by as much as 9%. Meanwhile, corporate profits continued to rise, sometimes by as much as 6.5 percent in Romania, it said.