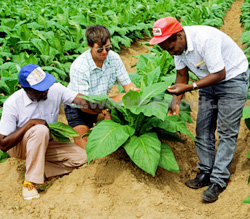 THE European Union (EU) has injected $7 million towards the revitalization of the country’s agricultural sector whose yields have been declining since the turn of the millennium.
Since 2000 when President Robert Mugabe’s administration embarked on the land reform programme which saw the violent seizure of farms from white commercial farmers without compensation, Zimbabwe’s food production has been dwindling.
Mugabe partitioned the seized productive land to former liberation war fighters and close allies most of whom did not have basic farming knowledge.
As a result, Zimbabwe, once the bread basket of the region, is now a basket case relying on food aid.
To assist in the revival of the once vibrant agriculture sector, the EU on Monday said it was calling for proposals from organizations involved in projects that aim at promoting sustainable service delivery in the field of research, education and extension for improved contribution to wealth creation and agricultural growth.
“The target groups of this support include the Departments of Research and Specialist Services and of Agriculture Education and Farmer Training, Agritex and Ministry of Youth and Indigenization,” the EU Harare office announced.
The EU noted with concern the declining food production saying it wanted to assist Zimbabwe to regain its bread basket status.
“Service provision to the Agriculture Sector has eroded over time and is largely ineffective and inefficient in supporting value chain development and rural development in an agriculture and farming landscape that has significantly changed,” said EU.
“It is therefore critical to re-think and re-define relevant, farmer centric and value chain oriented services and to develop a robust framework for their sustainable effective and efficient delivery,” EU said.Advertisement