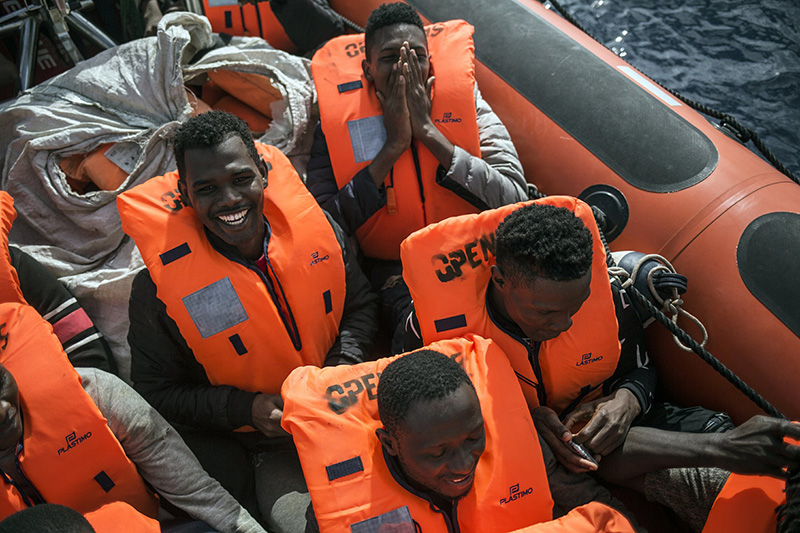 BRUSSELS: European Union leaders were set Thursday to push ahead with plans to boost cooperation with North African countries and beef up the bloc’s borders in an effort to stop migrants entering Europe.

A draft statement prepared for their summit emphasises the need to step up cooperation with countries that people leave and transit through to seek shelter or better lives in Europe.

They said that work with those countries on “investigating, apprehending and prosecuting smugglers and traffickers should be intensified.” They also called for a joint smuggling task force to be set up.

Well over 1 million migrants entered Europe in 2015, most of them Syrians and Iraqis fleeing conflict, but numbers have dropped significantly since the EU began outsourcing the challenge to Turkey.

Turkey has been offered at least 3 billion euros ($3.4 billion), ostensibly in Syrian refugee aid, to stop people leaving there for Europe, and the bloc wants to reproduce that model elsewhere.

The EU has had to look outside to solve the problem because reforms to its asylum system are blocked by the refusal of some countries to accept refugee quotas.

European countries in the Mediterranean like Greece, Italy and more recently Spain feel abandoned to manage the influx alone, and tensions over how best to handle migrant numbers — which pale in comparison to refugee arrivals in Turkey, Lebanon and Jordan — have increasingly fueled support for far-right parties in Europe.

“We can’t just say that a country with a border on the sea is suddenly the only one responsible” for migrants, said Luxembourg Prime Minister Xavier Bettel. “The problem is European and the solution should be a European one as well.”

Amid the standoff over quotas, momentum is gathering for countries to pay more money — for example to countries like Greece and Italy, or fund development aid — instead of hosting refugees.

“We’re recommending that instead of mandatory quotas that we go the way of solidarity. This means that each country will provide a contribution where it is possible and where it makes sense,” said Austrian Chancellor Sebastian Kurz, whose country holds the EU’s rotating presidency until the end of the year.

“It’s possible, no refugees but more money,” he told reporters, adding that it must be substantial funds, “not nothing, not peanuts.”

“It’s better an agreement with a compromise than no agreement,” he added.

However, migration experts and nonprofits doubt whether any scheme would work without actually sharing out refugees.

As the EU looks abroad for a solution, Egypt has appeared a prime candidate for a new partnership. Kurz and European Council President Donald Tusk have held talks with Egyptian President Abdel-Fattah el-Sissi, a top army general who took office in 2014. Both men praised him for stopping people from leaving its coast on their way to Europe.

The aim would be to get the Egyptian coast guard to patrol the waters off Libya — the main point for migrants leaving for Italy — and take any rescued people back to Africa.

In response to criticism that it’s neglecting migrants and their rights, the bloc has said that it works closely with the U.N.’s refugee agency and the International Organization for Migration.

But both agencies underline that, even though numbers have dropped, more people are dying at sea than ever — more than 1,700 people so far this year — and that the migrant debate has become “dangerously toxic” in some parts of Europe.

“The current tenor of the political debate – painting a picture of Europe under siege – is not only unhelpful but completely out of touch with reality,” U.N. High Commissioner for Refugees Filippo Grandi said in a joint statement.

“We cannot forget that we are talking about human lives. Debate is welcome – scapegoating refugees and migrants for political gain is not.”