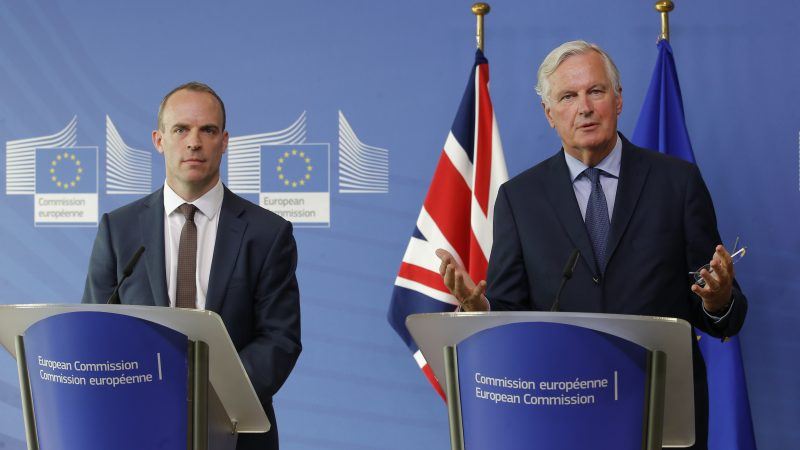 British and European leaders insisted Monday they could still reach a Brexit deal despite the latest failed round of divorce talks, but the EU warned it was stepping up “no deal” preparations.

British Prime Minister Theresa May admitted there was still “disagreement” over how to keep open Britain’s land border at Northern Ireland with EU member Ireland, but said a deal was “achievable”.

They were speaking two days before heading to Brussels for a summit of EU leaders that had been billed as a “moment of truth” ahead of Britain’s exit from the bloc in March.

EU Brexit pointman Michel Barnier met his British counterpart Dominic Raab in Brussels on Sunday, but they failed to agree to a draft Brexit divorce arrangement as had been hoped.

Irish Prime Minister Leo Varadkar, whose country would suffer the biggest economic impact if Britain left without a deal, said an agreement was now more likely in November or December.

May’s Northern Irish allies meanwhile warned the impasse meant it was “probably inevitable” Britain would now leave the EU with no deal.

And in Brussels, European Commission spokesman Margaritis Schinas said the bloc’s preparations were being stepped up for a disorderly Brexit.

“While we are working hard for a deal, our preparedness and contingency work is continuing and intensifying,” Schinas said.

Meanwhile, May made a statement to the House of Commons to address what she called “inaccurate speculation” about the Brexit talks.

The Conservative leader, who is facing a political high-wire act in trying to reach a deal that is acceptable to both the EU and MPs at home, said it was time for “cool, calm heads to prevail”.

But the threat she faces was revealed by Sammy Wilson, the Brexit spokesman for the Democratic Unionist Party (DUP) which props up her government.

He suggested there was no Brexit deal that would command the support of all British MPs, saying a no-deal scenario was “probably inevitable”.

Europeans insisted there was still time to resolve the outstanding issues before a possible emergency summit in November.

“We were actually pretty hopeful that we would manage to seal an exit agreement. At the moment it looks more difficult,” Merkel said.

A breakthrough would require “quite a bit of finesse and if we aren’t successful this week, we’ll just have to keep negotiating”, she told the German Foreign Trade Federation.

In Paris, Macron said: “I believe in our collective intelligence, so I think we can make progress”, but added that “we are ready for all scenarios”.

Arlene Foster, the leader of Northern Ireland’s Democratic Unionist Party (DUP), whose spokesman has warned it was “probably inevitable” Britain would leave the EU with no deal

Sunday’s talks ended without a breakthrough on the crucial issue of future trade to and from the British province of Northern Ireland.

London and Brussels say they want no checks imposed on the land border between Northern Ireland and the Republic of Ireland, but the problem persists of how to square that aim with Britain’s decision to leave the EU’s single market and the customs union.

“There are some fundamentals that we can’t compromise on,” Varadkar said on Monday.

Britain has proposed sticking with EU customs rules after Brexit as a fallback option to keep the border open, until a wider trade deal is agreed that avoids the need for frontier checks.

The EU’s suggestion would see Northern Ireland remain aligned with Brussels’ rules, thus varying from the rest of the United Kingdom — which is unacceptable to the DUP.

May said this weekend’s talks broke down because, while the EU had accepted the London plan had merit, it was still insisting on its own proposal.

She added that the two sides also disagreed over how long the fallback “backstop” would last.

“If the EU were not to co-operate on our future relationship, we must be able to ensure that we cannot be kept in this backstop arrangement indefinitely,” she said.