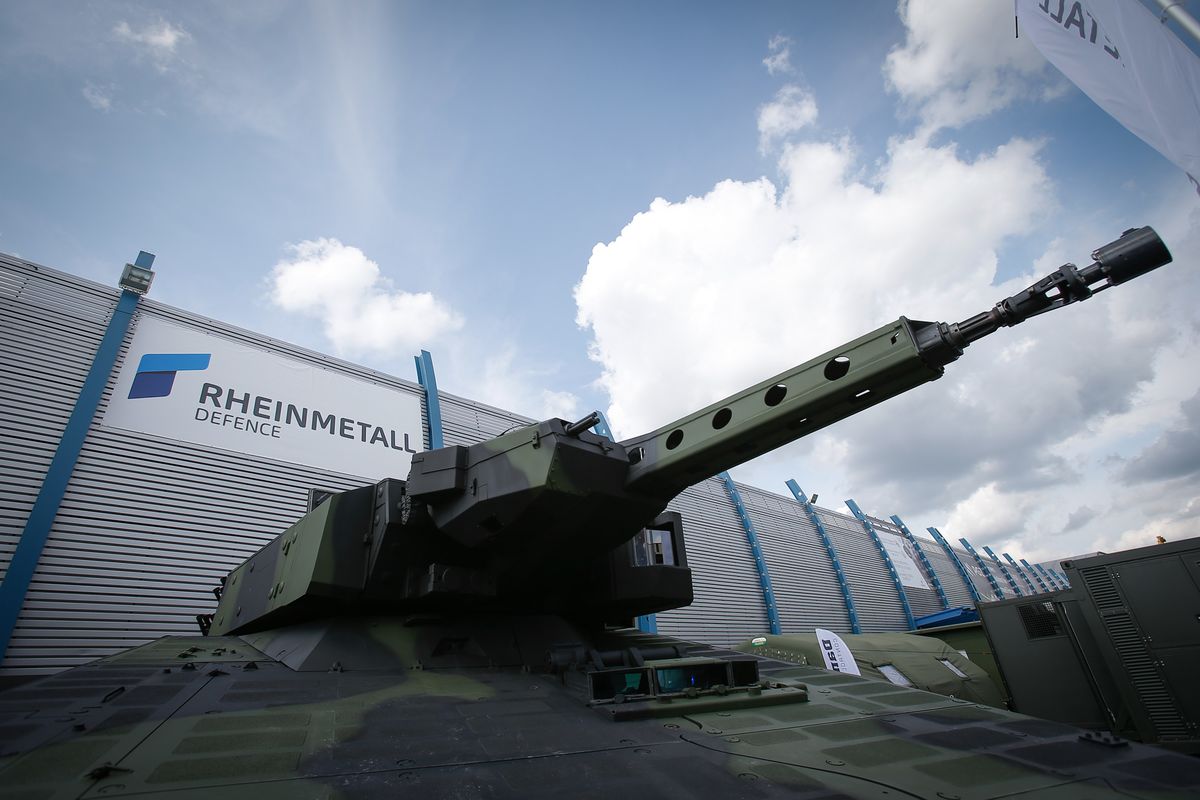 Europe’s largest economy will this year inject 100 billion euros ($113 billion) into a special fund to modernize the army, Chancellor Olaf Scholz said Sunday in a speech to the lower house of parliament. From now on, Germany will hit a NATO target of allocating at least 2% of gross domestic product to defence, he told lawmakers in Berlin, a goal the country has consistently failed to meet.

The move sparked gains of as much as 89% for sensor and radar maker Hensoldt AG in early Frankfurt trading, while Rheinmetall AG, a producer of tanks and personnel carriers, soared 49% to a record. French fighter jet maker Dassault Aviation SA jumped as much as 11% while service provider Thales SA gained 16%.

“Non-US NATO members must increase defence budgets by 25% if they want to reach 2% of GDP — clearly Germany represents the largest potential uplift in absolute terms,” Jefferies analyst Chloe Lemarie wrote in a research note. “Defense consumables like ammunition and countermeasures should be the first products to experience restocking and order uplift.”

Rheinmetall has offered has offered the German government delivery of a package of military equipment that includes ammunition, helicopters, and tanks with a value of about 42 billion euros, Chief Executive Officer Armin Papperger told Handelsblatt in an interview published Monday. The company is also increasing manufacturing of tank ammunition to 240,000 units a year from about 40,000.

Prior to the conflict erupting, tight military budgets weighed on the defence sector for years, until orders picked up substantially in the wake of Russia’s annexation of Crimea in 2014. The deepening conflict in Ukraine could trigger more orders as well as an unblocking of talks to develop a future European combat plane.

Germany rebuffed for years calls for a meaningful increase in defence spending, leading the armed forces across the board to struggle to maintain key technology. Significant parts of defense apparel including fighter jets, tanks and submarines are non-operational because of repairs and problems sourcing replacement parts.

Germany has reduced the number of its battle tanks to 300 from around 5,000 since 1989 and the number of warplanes to 230 from more than 700, according to a report in Der Spiegel magazine.

Allocating the extra funds effectively will require an overhaul of Germany’s armed forces, Finance Minister Christian Lindner said Sunday. Slow progress with a range of projects meant spending by the ministry of defence was well below budget last year.

Defence companies will also benefit from a potential shift in Germany’s export rules. On Saturday, Germany joined other nations in agreeing to send military equipment to Ukraine, breaking with a traditional rule not to make available German arms to conflict areas.

On Sunday, Scholz urged international cooperation to bolster Europe’s ability to defend itself against risks like cyberattacks and remain technologically competitive.

“It’s so important to me that we build the next generation of fighter jets and tanks here in Europe together with European partners — and France in particular,” Scholz said in his speech. “Until the aircraft are ready for use, we will jointly develop the Eurofighter.”

Contracts for the so-called Eurodrone project, a cooperation between Germany, France, Italy and Spain, were signed last week, he said.

“We are also pushing ahead with the acquisition of the armed Heron drone from Israel,” Scholz said. Germany will also “procure a modern replacement for the obsolete Tornado jets in time.”