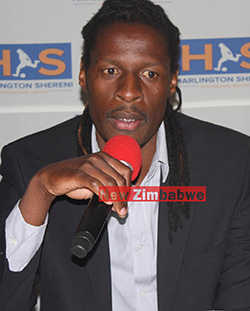 A NUMBER of European stars including France international forward Olivier Giroud and Senegalese El Hadji Diouf are expected in Harare at the end of this month.
The stars will participate in Harlington Shereni’s testimonial match scheduled for 27 June at the National Sports Stadium.
Apart from the duo, Arsenal’s Laurent Koscielny, former Warriors captain Peter Ndlovu and Benjani Mwaruwari are some of the big name players set to take part in the testimonial match.
Shereni becomes the second player in Zimbabwe to arrange a testimonial match after Mwaruwari.
The organisers of the testimonial match have called for a press conference on Tuesday morning to give an update on the testimonial match.
A Harlington and Friends side will play against the Warriors.
Shereni spent three seasons at French League 1 football side Guingamp playing alongside Koscielny.
They both left Guingamp at the same time in 2007 when Shereni joined Nantes, while Koscielny headed to Tours Football Club.
Shereni played for CAPS United, Air Zimbabwe Jets and later Dynamos.Advertisement