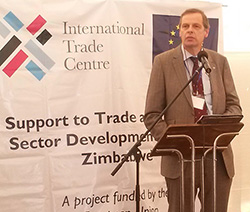 THE government on Monday signed five agreements with the European Union under the 11th European Development Fund (EDF) amounting to EUR89 million (about US$98 million) for health, agriculture and institution building.
Speaking at the signing ceremony Secretary for Finance Willard Manungo said the latest advance brings the total draw-down from a facility with the Fund to Euro123 mln in addition to the initial 34 million extended at inception.
Head of EU Delegation to Zimbabwe, Philippe Van Damme, said EU member states are engaging with Zimbabwe not only in the aid front but through trade and investment.
He said this has seen various EU trade missions visiting Zimbabwe on business exploratory trips.
Finance Minister Patrick Chinamasa said: “The signature of these five financial agreements confirms the continuing normalisation of relations in terms of development cooperation between EU and Zimbabwe”.
The funding will contribute to the implementation of the national priorities espoused in the government’s ZIMASSET economic plan.
Under the deals signed Monday, the health sector is the largest beneficiary at EUR55 mln which will be channelled to the Health Transition Fund and Health Development fund administered by UNICEF.
A total EUR15 million has been allocated for resilience building in the Food and Nutrition Security Sector and will be administered by UNDP while Public Finance Management reforms will be supported with EUR10 mln through the World Bank’s Zimbabwe Reconstruction Fund.
Ambassador Van Damme said the European Investment Bank is also assessing the possibility of extending new credit lines to the local banking community for on-lending to SMEs.Advertisement