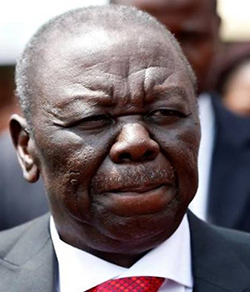 THE European Union (EU) has paid tribute to the late MDC-T party leader Morgan Tsvangirai, saying he would be missed by the world for the pro-democracy principles he stood for during his life time.
Tsvangirai died Wednesday in South Africa where he was receiving medical treatment. The late opposition party leader was battling colon cancer which he was diagnosed with three years ago.
In a statement Thursday, the EU’s Harare head office said the former Zimbabwean Prime minister would be “sadly missed”.
“It is with great sadness and sorrow that we have learned of the passing away of Mr Morgan Tsvangirai, opposition leader and Zimbabwean Prime Minister of the Government of National Unity from 2009 – 2013, after a long and brave battle with cancer,” reads the statement.
“He will be remembered as a great trade unionist and a courageous man who, as President of the Movement for Democratic Change since its foundation in 1999, stood up for multi-party democracy and justice.”
Tsvangirai’s death ends a long campaign that brought him jailings, beatings and accusations of treason as he tried to topple the Zanu PF-led government.
At the time of his death veteran politician had united the founder members of the MDC and established a coalition through which he again looked to challenge Zanu PF in elections due this year.Advertisement