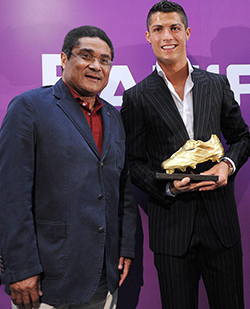 LEADING football figures have paid tribute to Portugal legend Eusebio, who  has died at the age of 71.
The former Benfica striker scored 733 times in 745 professional games and was top goalscorer at the 1966 World Cup.
Chelsea’s Portuguese manager Jose Mourinho said of Eusebio: “I think he is immortal.”
Manchester United and England great Bobby Charltonsaid Eusebio was “one of the finest players I ever had the privilege to play against”.
Fifa president Sepp Blatter tweeted: “Eusebio’s place among the greats will never be taken away.”
In a statement, Benficasaid: “We will remember his talent, his example, his character which marked Portuguese football and which established him as a global benchmark for football.
“Eusebio’s life is the heritage of all those who love football.
“Benfica was his home port. He made Benfica more than a club, he made it his home and his family. The memory and legacy of Eusebio will remain among us.”
Portugal captain Cristiano Ronaldo said his countryman was “always eternal” while Luis Figo who won a record 127 caps for Portugal, described him as “the greatest”.
Ronaldo’s club, Real Madrid, will hold a minute’s silence before Monday’s La Liga match against Celta Vigo, and their players will wear black armbands.
Mozambique-born Eusebio won the European Cup with Benfica in 1962, and went on to score nine goals as his side reached the semi-finals of the 1966 World Cup, where they were beaten by eventual winners England.
Former Germany captain and coach Franz Beckenbauer, who also starred at the 1966 World Cup, wrote on Twitter “One of the greatest football players ever has passed away. My thoughts are with his family.”
Eusebio was part of the Benfica team beaten 4-1 in extra time by Manchester United in the 1968 European Cup final.
He was famed for his powerful shooting and blistering acceleration, traits which made him the Portuguese top flight’s leading scorer seven times during a 15-year, trophy-laden spell with Benfica.Advertisement