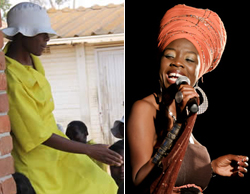 JAILED jazz star Dudu Manhenga’s head still remains a mystery – even in prison.
Soon after her imprisonment last Friday, the singer adopted a white sun hat to substitute her famous headgear. Even her fellow inmates do not have the faintest clue of what her head looks like.
Dudu – jailed 18 months for causing the death of a biker in a road accident – cast a lonely figure when fellow musicians visited the Chikurubi Female Prison on Wednesday with one inmate saying she was still to come to terms with her fate.
They were, however, intrigued by her fondness of wearing her hat, everywhere and all the time.
“We don’t even know whether she has got hair or not because she is always wearing a hat. She spends most of her time alone and we hope she will soon cheer up and teach us how to sing,” said one inmate.
The musician is on record as saying she will never remove her headgear except for a charitable cause.

“It all started off in Bulawayo as a cover-up when my hair was in a mess before a show years back,” she once said.
“Since we could not afford to get my hair done, my mother was quite creative and worked this unique ‘dhuku’ style with a bed sheet. I do remove the headgear at times but only when I’m not making an appearance as Dudu Manhenga, the singer. I will remove it for anyone who makes a donation to charity.”
Meanwhile, Zimbabwe Prisons and Correctional Service Commissioner-General Retired Major-General Paradzai Zimondi encouraged her to be strong and move on with life.
“I heard she is not taking it lightly but that is life, she should move on. In fact, I want her to be part of the inmates who will perform at Africa Prisons and Correctional Day this Saturday,” he said.Advertisement