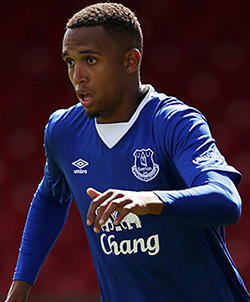 EVERTON left-back Brendan Galloway has joined West Brom on a season-long loan deal.
The Zimbabwe-born defender becomes Tony Pulis’ second summer signing following the recruitment of QPR winger Matt Phillips for £5.5m last month.
The agreement which sees Galloway switch to The Hawthorns does not include a recall clause, meaning the England youth international will remain there until next summer.
He told West Brom’s official website: “I’m delighted. It’s a great club and I’m really looking forward to getting started.
“My aims are to play and work hard for the team and help win as many matches as I can. It’s all about winning.
“I think for me personally, it’s really important to gain more experience. Coming here is the perfect opportunity to do that. I can’t wait to get started and put the shirt on.”
Galloway was an unused substitute for Everton’s first Premier League game of the campaign, the 1-1 home draw with Tottenham on August 13.
He was then left out of the squad for Saturday’s match against his new club, a fixture Ronald Koeman’s side won 2-1 as Gareth Barry scored the winner.
Galloway joined Everton from MK Dons on a five-year deal in 2014 after making his debut for his first club at the age of 15 in an FA Cup tie against Nantwich Town.
He made 19 appearances for the Goodison Park side last season, 16 of them as a starter, and was booked three times.
The term, however, he will spend the campaign in the Midlands, with Pulis now keen on adding up to another four players to his group.Advertisement