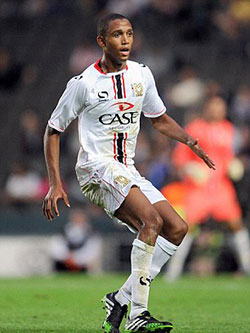 ENGLISH premiership side Everton are closing in on a deal for 18-year-old MK Dons midfielder Brendan Galloway, who had previously been linked with a move to championship club Norwich City.
Galloway was born in Zimbabwe, but has gone on to represent England at Under 17, Under 18 and Under 19 level.
Reports from Milton Keynes suggest The Toffees look set to beat Norwich City to the signing of highly-rated MK Dons youngster as part of a blockbuster £4 million deal.
According to the Milton Keynes Citizen, Everton are close to completing the transfer, with Galloway noticeably absent from training last week and left out of the Dons squad for their current training trip in Ireland.
Dons manager Karl Robinson has so far refused to confirm any deal is in place, but with rumours surrounding Galloway’s future continuing to circulate, the move could even be completed by the end of the week.