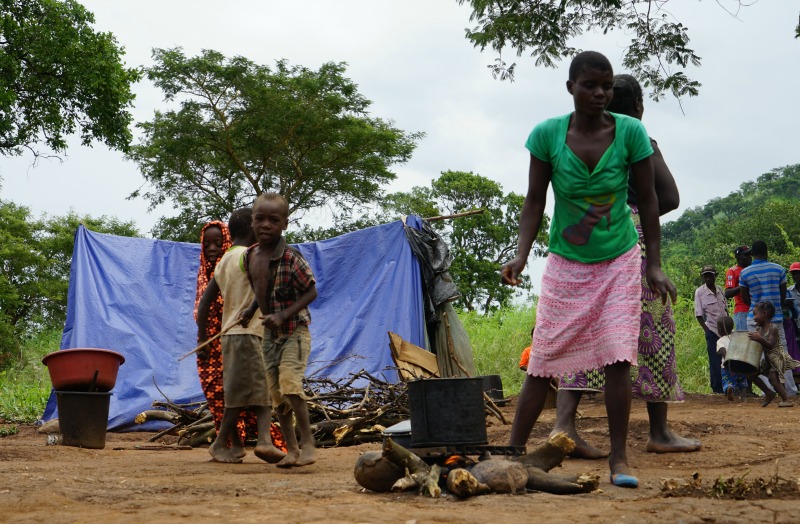 FOUR months ago, 18 families where hounded out of a church farm in Mashonaland Central by truckloads of armed para-military police with dogs and teargas canisters in their arsenal.

They have since been dumped on state land, seven out of Bindura towards Mt. Darwin and some three kilometres from the Kingsway Community Church farm where most were born, raised and even married.

The families have been forced to leave their ancestors’ graves and told by government through the District Administrator Richard Chipfuwa to look for alternative land to stay.

However, surrounding Chiefs and Sub-Chiefs have resisted the move to force the largely migrant population onto their land leaving them stuck on the side of the highway where they are exposed to the elements of the weather.

“It is now four months since we have been living here, the only help we have been given are these tents you see and they were given to us after a month of heavy rains which destroyed the little property we had,” said Siliza Makamu, a widow who was forced out of the farm together with her five children.

“The District Administrator and the six war veterans who chased us off KCC farm visited us a few weeks ago and told us to approach neighbouring chiefs and sub-chiefs for land but they have refused to give us any; they are saying we will still be followed and chased away from whatever land they would have given us.”

“Our plea to government is ‘may it give us land we can call ours’ since we have already been chased off the farm. We just want security so that we do not end up on the highway like what is happening now.”

“We see government vehicles speeding past on their way to Mt. Darwin or Bindura every day and can only imagine what they will be thinking when they see us stuck here.

“I am sure they think we are some criminals or just a group of mad people tired of scavenging in town.”

The evicted farm workers now want the first lady Auxilia Mnangagwa to intervene in their plight.

“We are now desperate, our faith is now in the first lady to assist us,” said Portia Nyanganya.

“We hope she can find time to come and see for herself how we are living in this bush. At least she can know that some citizens of this country are suffering and can help us find shelter.”

Part of the over 50 victims is 73-year-old Atrace Kachala who needs high blood pressure and sugar diabetes medicines now being sold in US dollars and inaccessible to the poor family taking care of her.

When NewZimbabwe.com spoke to her in her tiny tent, the anguished elderly villager felt she was going to die from lack of medication.

The disillusioned grandmother who is being taken care of by Denise Mabisi, her son-in-law was however oblivious of that they had been chased off their homes.

Former Zanu PF Senator Damian Mumvuri has come out prominently among those who behind the evictions.

Also cited are some war veterans only identified as “Cdes” Chindoko, Mapondera, Magwenya, Munyoro and John.