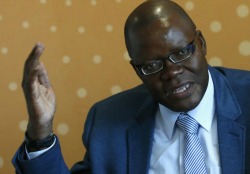 FORMER Finance Minister Tendai Biti has urged the government to protect bank depositors’ US dollar bank balances from being wiped out due to the sharp fall of the bond note.
The value of the surrogate currency tumbled spectacularly last week amid disputed claims the Reserve Bank of Zimbabwe (RBZ) had clandestinely released loads of bank notes onto black market to mop up scarce foreign currency for government.
When it introduced bond notes ostensibly to ease a crippling liquidity crisis in the country 2016, the RBZ was adamant that the currency shall trade at par with the US dollar.
But after enduring market pressures for a few months, the fragile currency finally lost its value, triggering massive panic among locals who stormed supermarkets to do unbudgeted purchases in anticipation of a price hike.
Since the fall of the bond note, a US$100 bill can now exchange for $120 on the black market. Higher denomination notes fetch more.
Biti, treasury chief during the coalition government said Wednesday that current bank balances must be allowed to retain their US dollar value.
“With the sharp collapse of the bond note & RTGS exchange rates, it is urgent that present bank balances are ring fenced in their US$ form,” Biti said in a Tweet.
Zimbabweans still have fresh memories of the pre-2008 period when pensions and savings were lost when the country recorded 230 million percent at the last count July 2008.
Biti, during his tenure, earned world admiration after introducing the so-called “eat what you kill” policy which entailed a break from the culture of careless spending through borrowing among government ministries.
But since Zanu PF elbowed its coalition partners out of the GNU in 2013, Zanu PF returned to its free-spending habits, something that has pushed the country’s volatile economy on a cliff again.
Despite apparent signs of economic distress, the Zanu PF-led government has tried to put a strong face while assuring crisis-weary citizens the economy will not slide back to the 2008 catastrophe.
Since the shock price hikes of the past week, government has responded punitively with the weekend arrest of protest pastor Evan Mawarire for posting a video in which he was urging locals to urge for tougher economic times under the current regime.Advertisement

Home Affairs Minister Ignatius Chombo followed with a chilling threat to the media and social media users found spreading “alarming” messages about a country starring an economic tornado.
Police have since swooped on illegal foreign currency changers who are accused of fuelling the fall of the local currency.