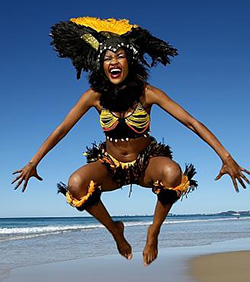 ZIMBABWE’S Nomathamsanqa “Normah” Mkwananzi is the female lead in Cirque Mother Africa which is currently touring Australia.
Cirque Mother Africa is described as a circus of the senses — music, dance, acrobatics and an insight into festive traditions from throughout the continent. Hollywood star Robert De Niro is a fan, and Parton herself joined Mkwananzi on stage at one performance.
Since age six, Mkwananzi knew she wanted to be a singer. Soon after, her showbiz career was launched as an extra in the movie The Power of One.
“I was seven years old at the time. I remember seeing Morgan Freeman. To me, it was just this man,” Mkwananzi said. “He used to play with us kids in the break.”
More than a decade later, watching the movie on a visit to the UK, she realised the significance of this meeting.
“I thought, ‘No, it can’t be. I was in this movie and I met Morgan Freeman’.”
While life on the road can be tough – Mkwananzi’s 11-year-old son is cared for by his grandparents in Zimbabwe – the joy of travelling the world doing what she loves is a dream come true.
In recent days, Mkwananzi has given interviews on the show and her involvement to various Australian publications. Below are some excerpts …
What can the audience expect from Cirque Mother Africa?
Mother Africa will take you on a journey to Africa for two hours in a melting pot of different African cultures dances music and acrobatics.
What is your background in performing and how did you come to be a part of this show?
Ventured into the arts at a tender age, when I was seven I landed a role as an extra in the movie Power of One where Morgan Freeman and our own Bulawayo Amakhosi Actor were the main actors. As I grew up I loved singing, I sang in church and school as well. In the year 2000 I became a member of Zimbabwe Theatre Group IYASA and toured Africa and Europe with them then in 2006 Mother Africa director Winston Ruddle came to Zimbabwe and held auditions. He was looking for singers who can dance as well and I was one of the chosen ones. I have been with Mother Africa since then.
More than two million people have seen Cirque Mother Africa around the world. Have you enjoyed visiting Australia?
The show has been to almost every continent and well received with people like Dolly Parton watching it twice and Robert De Niro as well. This is the second time in Australia and I must say it’s my favourite place of all the countries I have been to. I like the weather, the people are friendly I just love it here.Advertisement

Nine African countries are represented in Cirque Mother Africa. Can you tell us how such a unique mix of people combines to create the show?
Our performers come from Kenya, Ivory Coast, Ethiopia,Benin, South Africa, Zimbabwe, Ghana and Tanzania – these are almost all the corners of Africa and each and every country has different cultures. We have mask dance from Ivory Coast, Mbira a 22 key instrument from Zimbabwe, a gumboot dance from South Africa and all the different acts from the other countries and songs as well. Combined together, we have a very colourful and unique show.
Can you tell us about the different forms of performance in Cirque Mother Africa such as the singing, dancing, drumming and circus acts?
Like I said before we make the impossible possible. We have our very own snake man Lazarus. Gitu who can fold himself into any shape you can think of and from Ghana Emmanuel spins up to 10 dishes with his fingers toes mouth head all at the same time.
We also have a Sewasa from Ethiopia; she juggles a table with her feet whilst Tamarat also from Ethiopia juggles with his feet and can do up to a hundred backflips all at once and all that mixed with the melodious voices from the singers and our band and powerful drummers the show becomes so much fun to watch and listen to!
There’s lots of acrobatics involved – what has been the biggest challenge you have had during preparation for the performances?
Our show consists of 30 artists from Zimbabwe, South Africa, Ivory Coast, Tanzania, Kenya, Ethiopia and Ghana so its 30 people all on the same stage and backstage with different props very big and small. The biggest challenge that we always have is space, especially when the venue is small, though we always find a way of fixing it. Other than that we don’t have many problems because we are family and we always work together to find solutions.
What is your backstage routine before a show – does the cast get together for a group warm-up or do you all focus on preparing individually?
When we get to the venue we get everything, set, the props and costumes, soundcheck and light check then we have an hour of group warm up. Then after that everyone does their preparation for their acts individually.
Is there a highlight of the show for you? What do you think the audience is going to enjoy the most?
I have been with the show for eight years now and still find myself peeping through the backstage just to get a glimpse of what is on stage. We have an amazing band so before I go any further I always like listening to them. Then we have our snake man from Kenya, he can fold himself into any shape you can think of.
In a normal situation a table is for eating but our Ethiopian juggler throws it into the air with her feet still on the kitchen utensils. At Mother Africa we don’t only use dishes in the kitchen as our own Emmanuel spins up to 10 dishes with his mouth, hands, feet and head all at the same time. I like all acts, they are all impossible in the same way the whole show is just full of unbelievable acts.
Describe what you feel when you step onto stage – do you still get nervous?
I get nervous every time before I go on stage because every show is a premier to me and I always want to do better everyday but I really have lots of fun.
Four words that describe you best?
Loving, passionate, humorous, jovial.
What do you love about touring?
Seeing the world, different people and learning about their cultures.
When I was a child I wanted to be?
When I was a child I always wanted to be a singer.
What inspires you most?
The fact that I have been watched by millions of people all over the world – Austria, Germany, Italy, Swiss, US, UK, Singapore, Australia, Costarica and big stars like Robert De Niro and Dolly Parton gives me strength to keep going.The fact that they don’t understand my language but appreciate my performance is a big inspiration.