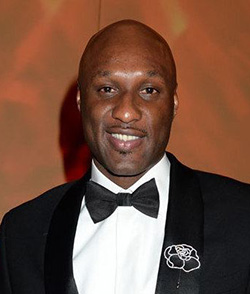 LAMAR Odom, a former professional basketball player and reality TV star, was reported to be fighting for his life in a Las Vegas hospital on Wednesday after he was found unresponsive at a legal brothel.
The 35-year-old former Los Angeles Lakers standout and ex-husband of Khloe Kardashian suffered a medical emergency on Tuesday at the Love Ranch brothel in Crystal, Nevada and was taken to the hospital, the Nye County Sheriff’s Office said.
Police received a 911 emergency call from panicked staff at the brothel at about 3:15 p.m. on Tuesday, saying that a man, identified as Odom, was unconscious, with blood and a white substance coming from his nose and mouth, Nye County Sheriff Sharon Werley told reporters Wednesday afternoon.
People at the brothel said Odom had been using cocaine and that he had taken as many as 10 tabs of an herbal sexual enhancement supplement. She said the people at the brothel who reported Odom’s cocaine use were not certain if he used it beyond Saturday.
It was the latest episode in Odom’s roller-coaster personal and professional life.
Sunrise Hospital & Medical Centre, where Odom was taken, declined to comment on Odom’s condition, citing patient confidentiality.
But celebrity website TMZ.com cited unidentified sources as saying Odom was in a coma and that some of his organs were failing.
Another outlet, E!, also cited unnamed sources in reporting that Odom suffered brain damage and at least one stroke, and was on a ventilator after taking multiple drugs. The E! cable TV channel airs the reality show “Keeping Up With the Kardashians.”
The brothel’s owner, Dennis Hof, said that, during his three-day stay, Odom had been taking large amounts of “herbal Viagra,” a non-prescription product which can dramatically lower blood pressure and interact with other medications.
Khloe Kardashian, whose whirlwind romance with Odom was captured in “Keeping Up With the Kardashians” and its spin-off, “Khloe and Lamar,” was at his bedside, TMZ and Us Weekly reported.

Support from ex-wife … Khloe Kardashian with Lamar Odom before divorce