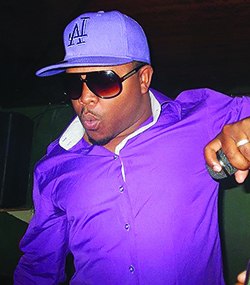 YESTERYEAR urban grooves maestro and singer of hit single Musalala Ex-Q’s marriage is allegedly on the rocks.
The arguably ‘stale’ dish of salad, whose music career has gone a tad past its ‘sell-by’ date, has confirmed he has hit rock bottom and left his wife for what he describes as his ‘first love’ – music!
“It happens in any relationship that things go sour and we have separated, my wife and I,” said Ex-Q.
The musician was quick to reveal where he is getting ‘some’ from now on.
“I am currently concentrating on my music career and it is something I have always wanted to do. It is important that I revive it and focus,” he said.
The ‘Ndinokutevera’ hit-maker dismissed word doing rounds in Harare’s ever-so-busy grapevine that he is seeing an older woman for whom he has left his wife and with whose three children he went on a jaunt with in Nyanga over the recent holiday season.
“That (rumour) is all lies,” he said.
“If you have had a life and career like mine you are not short of having courted controversy or at least made some haters along the way and it is they that are peddling these lies.
“I went to Nyanga on holiday to my rural home and not with some sugar mummy.”
The father of two has left his wife of six years, Irene Office, and hasn’t been tending to their two children Trey and Tiara ever since he left ‘the office’.
A close confidante of Ex-Q’s confirmed that the marriage had hit rock bottom and that there was a third force of an older woman playing the role of Ex Q’s ‘Camilla’ as it were.
“Ex-Q ane sugar mummy mudhara (He has a sugar mummmy), iyoyo toiziva,” confirmed the source, who said the two havent been having a rosy time in their relationship for quite a bit of a while now.
Irene, known for being media-shy and reserved would not comment on the matter, preferring to confide in her close friends and network as she faces what friends say is a “difficult time.”Advertisement