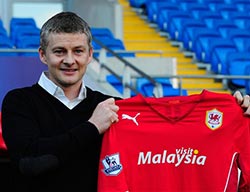 OLE Gunnar Solskjaer has been appointed as Cardiff City manager, just six days after the sacking of Malky Mackay.
The former Manchester United striker and Molde manager completed talks on Thursday morning, having been identified by Cardiff chairman Mehmet Dalman as his first choice from the outset.
He said: “I feel lucky to be back in the Premier League. I had to have a talk about it with the family obviously but it is a great opportunity.”
Solskjaer has joined on a “rolling contract”, but it has been suggested earlier in the week that he had reservations about taking the job due to the difficult relationship Mackay had with controversial owner Vincent Tan.
There were also reports his former United boss Sir Alex Ferguson had told him to turn Cardiff down, but the 40-year-old insisted the Scot had done no such thing, and had been in touch to wish him the best in his new role.
“He has wished me the best and given me some good advice as he always does. I had a good conversation with him.
“It is absolute nonsense (that he told me to turn down Cardiff).”
Solskjaer insisted he had no problems working with Tan, having attended Wednesday’s defeat at Arsenal alongside the Malaysian and Dalman.
He said: “I have had good chats with Mehmet and with the owner, we have had a good dialogue.
“I didn’t have any concerns. I want to talk about the future of the club and the way I want to move forward. What has happened has happened. He is the owner. He wants his club to be successful.
“He has ploughed loads of money in so he wants to be successful. I had a great meeting with him. He wants to succeed and to become the club he wants it to be.”
“I go into this with my eyes open and I want the fans to be proud of us when we go on the pitch.
“I will only ask my players for 100 per cent which was hammered down to me with the gaffer and Roy Keane at Manchester United. We can forgive mistakes as long as we have a go and enjoy playing in the Premier League.
“I felt I needed to be back here and I want to stay for the long, long term.”
Solskjaer also paid tribute to the work his two immediate predecessors had done at the club; Dave Jones and Mackay.
He said: “The two managers before me stabilised the club. Dave Jones got them to a cup final, and then Malky brought them up and also got them to a cup final.Advertisement

“They are going to be tough to follow, but I am glad to inherit the good squad that they moulded.”
Solksjaer leaves Molde having delivered two league titles and a cup to the club.
And Dalman has no doubt the Norwegian can make the step up to managing in the Premier League.
“He has played and won at the highest level as a player and has been successful in Norway,” he said.
“He is coming here to prove something to himself and to Cardiff. I had no doubts from day one, so I do feel like the cat that got the cream.”