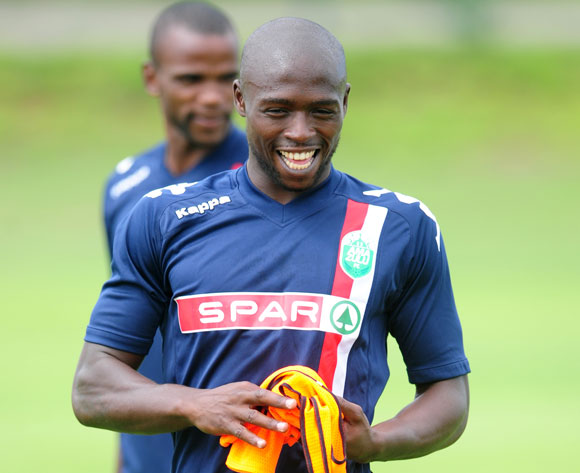 In happier times...Carlington Nyadombo during his time at Amazulu
Spread This News

ZIMBABWEAN defender Carlington Nyadombo has revealed that he has gone for six months without being paid at the South African top-flight side, Tshakhuma Tsha Madzivhandila (TTM) in what he equates to “modern-day slavery”.

The 35-year-old, who played for the now defunct former Zimbabwe champions Gunners FC before stints with South African sides Amazulu, Royal Eagles, has been with TTM for the past three years and helped it reach the promotion play-offs twice as a captain during their time in the National First Division.

Nyadombo was also captain of the club in the three years that TTM played in Division One and even wore the armband on the two occasions they reached the topflight play-offs.

However, he has now been left heartbroken, feeling abused, as he seeks to recover the money owed to him.

“I played in the play-offs, which ended towards the end of September, but I was not paid for that month and I haven’t been paid since then despite having two contracts,” he told South African football website KickOff.com.

“During that same month, in September while we were in the bio-bubble, I signed a new two-year PSL contract in front of the (previous) owner (Lawrence Mulaudzi) ahead of the start of the new season.

After signing the new deal, Nyadombo was given a coaching role at the club’s academy which he accepted with the hope that he would recover his dues.

“When we started pre-season, for the current season in the PSL, I was then told that they need me to be the coach of the MDC team, to which I agreed, because I would still be on the same contract that I had signed.

“I then conducted all the trials for the MDC team but then I still wasn’t paid.

“I wasn’t even given transport money and instead of using my car I was now using public transport which is cheaper since a taxi costs R20 from Louis Trichardt, where I stayed, to Tshakhuma [50km] where the MDC team trained.

“It then got to a point where I couldn’t afford the R40 for the return trip using public transport, so I then sat at home for three weeks, until the owner said I must return to first-team training since the team is not doing well.

“They then found another guy called Dan, who has an academy in Venda, to replace me. I was then taken for Covid tests and then given another contract to sign which I did in front of the manager Ricardo [Miriri].

“I started training on January 3 but come month end I wasn’t paid. When I asked why I wasn’t paid I was told by management that I must first work, yet I already had a contract and was training with the team. They then said they will talk to the boss.

He added: “Then when talk of the team being sold started the CEO told me that the new owners won’t be registering me so better that I look for another team.

“The CEO was fired the next day. I don’t know why I wasn’t being paid. Right now, my family is dying of hunger because I was last paid in August. I have a family to feed and deserve to be paid for what I worked for.

“The owner [Mulaudzi] told me not to call him because he is not my girlfriend and demanded that I send him texts, which he doesn’t respond to.

“Seems I was a modern-day slave at TTM because I worked for no pay. I have suffered enough in silence and I just need to be paid what is due to me.’’

Nyadombo, who earned five caps with the Zimbabwe Warriors, is now club-hunting.