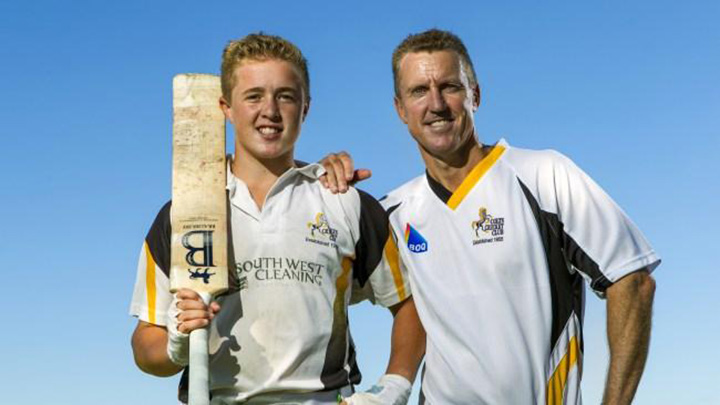 Jayden Goodwin with his father Murray
Spread This News

JAYDEN Goodwin, the son of former Zimbabwe national cricket team has been named captain of Western Australia’s under-17s cricket team at next month’s 2018/19 Cricket Australia under-17 Championships in Queensland, Australia.

The 16-year-old leg-spinning all-rounder recently revealed his dream of captaining Australia rather than playing for Zimbabwe, like his dad.

Murray played 19 tests and 71 ODIs for Zimbabwe, in between dominating the first-class scene for Western Australia and in England for two decades, scoring more than 41,000 runs in his stellar career.

“I’m super proud of it,” a humble Goodwin said. “I’m very happy to be able to be a leader for the team — and to be also be captain and from the country is very rare and is a privilege.”

Goodwin, who also plays Australian football, said he has been receiving some training from his father, who is widely regarded as one of Zimbabwe’s most talented batsman of his generation.

“I’ve been training with dad (former Zimbabwe international batsman Murray Goodwin) once a week through the start of the off-season.

“Now we are getting up to twice a week and going up to Perth once week as well. I’ve also been keeping fit by playing footy and things like that.”

Last season was another giant step forward for Goodwin who, like his father, is an accomplished batsman with an appetite for scoring lots of runs.

However, ahead of the new campaign, he is keen to keep it simple.

“I’ll try to score as many runs as possible — or close to dad I guess,” he said.

“Be a leader in my team as well. Also, by helping out others and standing out in our team.”

“He (dad) just says to stay calm and do the basics well,” he said.

“And that’s all I say to myself. If I’m under pressure or I’m doing well, I just try to stay cool and do the basics.”

Murray was born in Zimbabwe but spent his early years in Australia before returning to represent his country of birth.

He however, ended his international career at the age of 28 before returning to Australia where he represented Western Australia.

Goodwin Snr also enjoyed a remarkable career for English county, Sussex, where he earned legendary status in 2003 with a club high score of 335* against Leicestershire helping seal a first ever domestic title for Sussex in 164 years.

The former Zimbabwe international believes his son is a more complete cricketer than he was at the same age.

“At the same age I reckon he’s better than me, but what excites me is his bowling.” Goodwin Snr said.

“He’s reasonably accurate with his leggies and turns it both ways.

“That excites me because I think his batting is good, he’s got a really good temperament and handles pressure pretty well, but he’s got a lot to offer with his leg-spinners,” the 45 year-old former Zimbabwean star said.