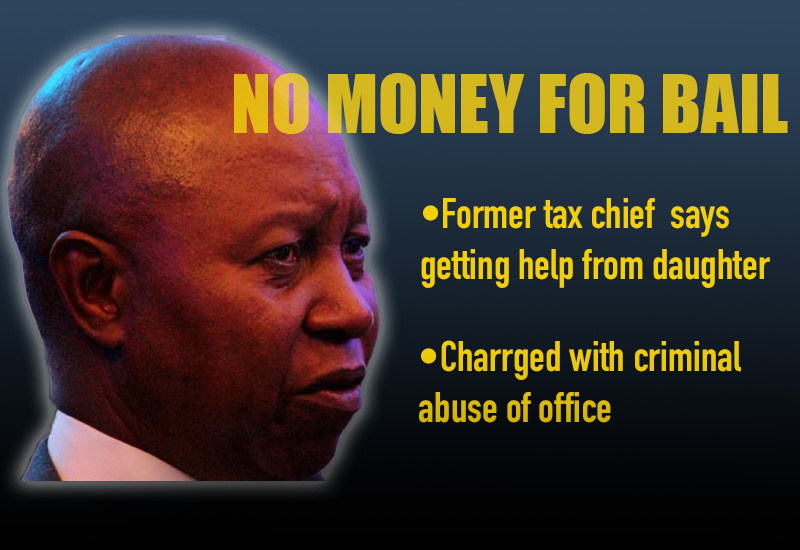 Pasi, 59, was charged with criminal abuse of office when he appeared before Harare magistrate Mishrod Guvamombe.

Prosecutors demanded $5,000 cash as well as immovable property worth $200,000 as part of his bail conditions.

Pasi however, told court that he could not afford the bail conditions.

He who resigned from ZIMRA in May 2017 after being on forced leave for a year to allow investigations into alleged corruption,

“Your worship, $5,000 is not a small amount,” said defence lawyer Taurai Mushoriwa.

“The accused is no longer employed and stopped working in 2016 when he left ZIMRA. The bail money is not even coming from the accused person but from his daughter.

“The state has suggested a surety of $200,000 but he is unable to surrender any of his houses because they all have mortgage bonds.

“His daughter is willing to surrender surety of a property worth $3,000.”

Prosecutor, Venerandah Munyoro insisted that the bail conditions were reasonable considering the seriousness of the allegations against Pasi and the prejudice suffered by ZIMRA.

Pasi desperately tried to convince the State to forfeit his Mercedes Benz S Class vehicle which he said is worth $150,000.

But magistrate Guvamombe said he could not review the ruling and suggested that the accused to apply for variation of the conditions on another day.

In interviews following after his resignation, Pasi insisted that he had left the tax agency with “nothing”.

“For the 35 years in government service, I walked away with nothing,” he said while dismissing reports about a golden handshake.

“I’m struggling now to get the small terminal benefits due to me and (payment) for the leave days I accumulated. I walked away with nothing.”

The allegations against him relate to a 2014 deal with a Chinese company for the supply of information management systems for Zimra.

The State is claiming that had Pasi directly engaged the Chinese firm as authorised by the State Procurement Board (SPB) ZIMRA would have paid $12 million.

However, the irregular involvement of a third party resulted in the tax agency eventually paying about $24 million for the equipment.