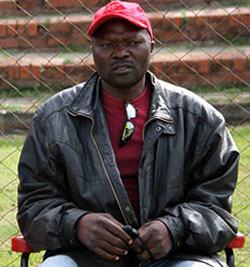 SHABANIE Mine coach Luke Masomere said they will not do league title aspirants Highlanders any favours when the two sides meet at Barbourfields Stadium on Sunday.
Highlanders are in contention for a first league crown since 2006 and Shabanie stand in their way in this last league match of the season.
Having surrendered top spot to Harare City lady weekend following a 4-0 drubbing by the Harare side, Highlanders found themselves sliding down to the number three position on the log.
Two points behind the leaders, they now have to pray for City and second-placed Dynamos to falter in their respective matches for them to be crowned champions.
Masomere has promised to come out of Barbourfields with points.
“It is all about fair play. How can we deliberately help another team win the league title? That would be match-fixing so we will be playing for a win,” Masomere said.
“Let us look at the bigger picture here. We are fighting relegation so we cannot afford to lose. This will make this match a tough one.”
Shabanie had a hand in removing Dynamos from the top last week when they forced a 1-1 draw with the defending champions.
Two seasons ago Highlanders saved Shabanie Mine from relegation after losing 2-0 at Maglas Stadium on the lady day of the season in a match the Bulawayo giants fielded a second string squad.
Highlanders will again be missing head coach Kelvin Kaindu who is in the UK for a Uefa B coaching course.
Weekend Fixtures: Monomotapa v Black Rhinos, Hwange v Motor Action, Caps United v Harare City, FC Platinum v Buffaloes, Tripple B v How Mine, Triangle United v Chicken Inn, Dynamos v Black Rhinos, Highlanders v Shabanie Mine