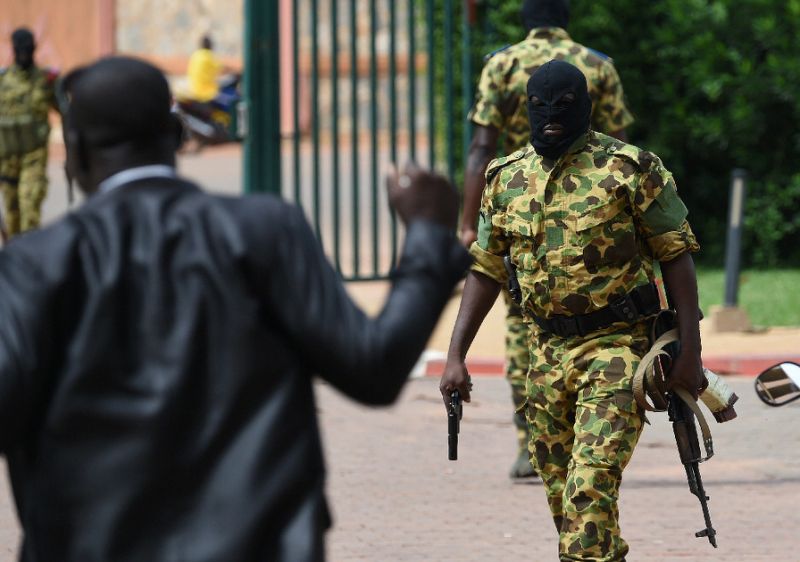 OUAGADOUGOU: Gunfire and explosions rocked Burkina Faso’s capital early Friday in what the police said was a suspected attack by Islamic extremists.

By midday the gunfire became intermittent and helicopters flew over the French Embassy in Ouagadougou. Witnesses at the national television office which faces the French Embassy told The Associated Press that five people came in a pick-up truck in front of the embassy and started shooting after saying “Allahu Akhbar.” They then set fire to the truck and began shooting.

Heavy smoke rose from the army joint chief of staff’s office in Ouagadougou, and witnesses said loud explosions were still heard around the military headquarters in the western part of the capital’s city center and far from the other area under attack that houses the embassies, the prime minister’s office and United Nations offices.

Plumes of black smoke could be seen above the army offices in western Ouagadougou where police and gendarmerie responded. Barricades were erected to keep people from all areas under assault.

Burkina Faso’s police said the defense and security forces are responding to attacks around the Prime Minister’s office and the United Nations.

France’s foreign affairs ministry published a message on their website warning of gunfire in the capital, and said that security forces are now intervening and enhanced security measures could be taken by authorities. It recommended people stay off the streets and remain in a safe place.

Ouagadougou has been attacked by Islamic extremists targeting foreigners at least twice in the past few years.

In August, extremists opened fire as patrons dined on a Sunday night at the Aziz Istanbul restaurant, killing at least 18 people. In January 2016, Islamic extremists attacked another cafe popular with foreigners in the capital, killing 30 people.

Both times security forces have struggled to contain the violence, waiting for hours before intervening at the scene.

Islamic extremist threats also moved into new parts of Burkina Faso earlier this month with an attack by 10 people in an eastern town that killed an officer and wounded two others. Increased attacks staged at the border with Mali have forced thousands to flee over the past year. An Australian doctor who had spent decades treating civilians was also abducted along this border and remains missing.

The region is also now the home of a Burkina Faso extremist figure, Malam Dicko, who has collaborated with militants across the border in Mali. Among his objectives has been seeking to end the use of French, the former colonizer’s language, in regional schools. Burkinabe forces backed by French military counterparts have tried to capture Dicko but he remains at large.