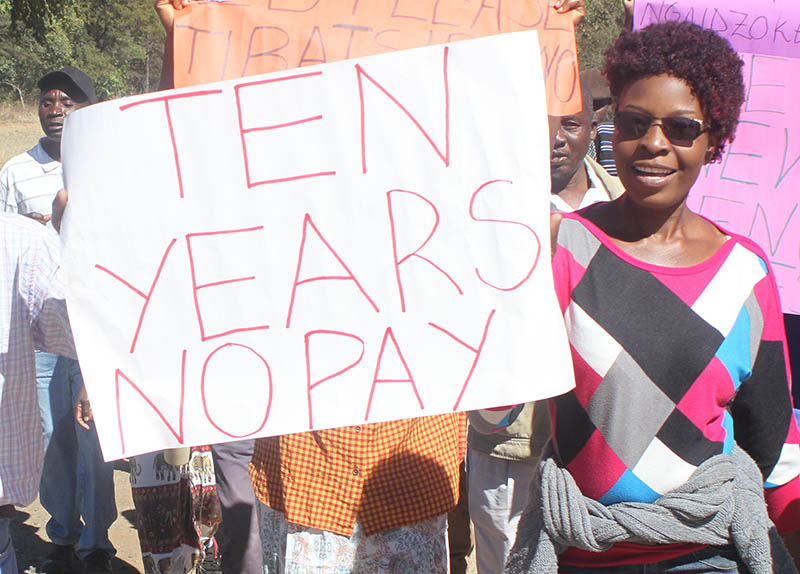 Protestors outside the company premises on Monday
Spread This News

WORKERS at Kwekwe-based GML Explosives staged a protest Monday appealing for President Emmerson Mnangagwa’s intervention in their stand-off with management over unpaid salaries.

The workers were joined by their spouses at the company gates demanding more than $1m in outstanding wages going back more than a decade.

“President Mnangagwa must get to hear of our plight. The President must intervene in our situation,” said one of the protestors.

“We are suffering we have nothing to feed our families with as our husbands have not been receiving their salaries.”

The workers claimed they were locked out of the now deserted company premises at the beginning of the year without any communication from management.

“The company owes us over $1, 3million in salaries backdated to 2008,” workers committee chairperson Fanuel Ganyiwa said in an interview.

“We were locked out of the company premises since the beginning of this year without any communication from management.

“We are in limbo; we don’t know what to do with our families who are now starving, and we are appealing to President Mnangagwa to intervene in our plight.”

Previously known as Dyno Nobel, GML is the only civil explosives manufacturing company in Zimbabwe.

Its products are used in the mining and civil construction industries and have been traditionally been exported to regional countries such as Zambia, DRC and Tanzania.

The company shut down in 2008 due to economic challenges in the country. It was later taken over by a consortium of Croatian investors and resumed operations in 2014.

Founded in 1990 as a technology transfer venture between a foreign parent and the government through Industrial Development Corporation, GML became 100 percent locally owned in September 2007.