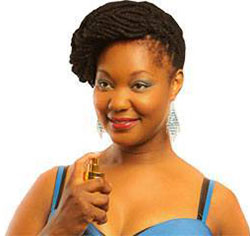 MULTI-TALENDED entertainment practitioner Eyahra Mathazia has returned from the “wilderness” and bounced back onto the music scene.
The actress-cum-musician has come out of a three -ear hiatus and released her third album titled ‘A Simpler Thank You’.
The 19-track album has some tracks produced by Jamaican star Sizzla Kalonji’s producer Caveman.
The album carries songs that touch on social awareness including My Wonderful, Trust Jah, Slave master (both co-written with her mother Xapa), I Love U Mama, Sensible woman and This Life (co-written with Shepard Munjari) and Mi Run Dancehall, among others.
On Slave Master, mother and daughter showed that creativity runs in their blood- truly born champions!
She also fuses Patois accent in her songs to ensure that her music does not lose the reggae identity and feel.
Asked on why she had not been active on the music front, Mathazia said she has been concentrating on other interests although she has been holding private shows “here and there”.
Her business ventures include interests in agriculture and beauty therapy.
“I have not been quiet as people perceive,” she said.
“I do solo performances at private functions as it is quite difficult to pay a full band from gate takings.  So one has to go with the flow and adjust. I have been giving time to my other business interests and recording my new album.”
Many remember Mathazia from the In My Dreams video by Innocent Utsiwegota and she is also the sweet cute girl in the sitcom Waiters.
She is however now a ‘grown up kid’ and her works of art have maturity.
The album was mastered in South Africa and the official launch date will be announced later this month.
Mathazia is one of the few female musicians in Zimbabwe who have ventured into the reggae genre.Advertisement