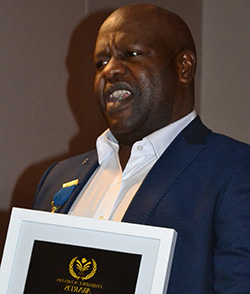 LONDON: Renowned Broadcaster Ezra Sibanda was among those honoured by ZAA Chairman Conrad Mwanza at the Zimbabwe Achievers Awards held at the Cumberland hotel in London on Saturday.
Sibanda said he was both humbled and honoured to be recognised and thanked everyone who has supported his career and philanthropic work over the years.
Honorary recipients included Marshall Gore, for his contribution to sports and community development, and Tawanda “Jusa” Sibotshiwe for creative entrepreneurship as a music producer.
“Last year we honoured the women who are doing amazing things in the media and this year it was only fitting to recognise the men. Legends and pioneers who have excelled for decades and are continuing to do outstanding work in the UK and abroad,” said Mwanza.
Senior Pastor of Christ United Ministries Liberty, Pastor Jide David Modede was awarded the Friend of Zimbabwe Award for his contribution to the Life Project.
Mwanza congratulated all the winners and thanked those who attended the seventh anniversary of the awards.
“We have been doing this for seven years. Sometimes we have got it right and there are times where we have got it wrong but, we have continued to persevere and run with the vision that started as an idea in conversation,” Mwanza said.
“It is not easy to put on an awards show of this magnitude. We have a team, both at organising level and at panel level who work tirelessly for months and I salute their efforts.
“We had an overwhelming response this year and we are grateful to all those who attended, who made it memorable and, who continue to support the vision and the brand.
“We hope to come back bigger, better and even stronger next year,” he added.
The event was hosted by Radio and TV personality Candice Mwakayele. There was also a surprise performance by dancehall artist Killer T.
2017 Winners
Community Champion of the Year – Dorcas Gwata
Event of the Year – SAMA Festival 2016
Fashion Designer of the Year – Tapiwa Dingwiza
Female Entrepreneur – Hanani Nqo
Female Personality of the Year – Ellen Chiwenga
MTM Financial and Management Accountants Business of the Year Award – SenditooAdvertisement