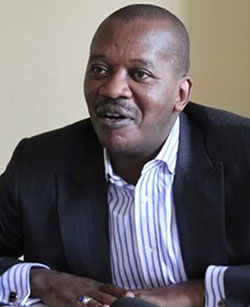 ZIFA presidential hopeful Leslie Gwindi says he will bring back the FA Cup in his first 100 days in office if elected. The elections have been scheduled for Saturday in Harare.
Gwindi will face incumbent Zifa president Cuthbert Dube who has declared his interest to seek re-election, Nigel Munyati who has been the Zifa board member responsible for marketing and former Zifa president Trevor Carsel Juul.
And Gwindi, a former Dynamos and PSL secretary general, said he would also establish a strong junior policy from area zones to the Premier Soccer League (PSL) if voted into the power.
The Harare City football club chair has released an impressive manifesto which hinges on the establishment of a vibrant junior football league including the women’s league as well as the re-establishment and religious adherence to the constitution which he described as “our football bible”.
Addressing reporters in Harare on Wednesday, Gwindi claimed there was a complete lack of good corporate governance by the current Zifa board which he said did not augur well for any organisation.
“About 9,5 million to 10 million people in Zimbabwe follow football and the rest are armchair viewers making it a national pastime. To rally people to believe why football is important is one of the fundamental issues,” he said.
“I am a firm believer in the restoration and the respect for the constitution which is our football bible. The re-establishment of the authority of the assembly as the supreme policymaking body is a must-action for my leadership.
“It is a must-action for my leadership to establish a robust junior programme. At Harare City, we defended a budget proposal which caters for the establishment of a strong junior policy which will bear fruit in about eight years. Look at countries like Ghana and Cameroon. They have a very progressive junior policy.
“We want a strong junior programme from area zones to the PSL which will help us form a strong national team. We can even assist the PSL with resources and technical support.
“We will ensure a strong junior programme will be one of the targets every regional leader should satisfy. It’s a fundamental issue which does not require finance, but planning.”
The Zifa presidential aspirant also said women football has been ignored by the current Zifa board.
“The Mighty Warriors have been a source of excitement because we didn’t have any national team to talk about. We need a strong junior league for women football,” Gwindi said.Advertisement

“We will assist the PSL and the regions to work together to build a brand for Zimbabwe in terms of football. In our first 100 days in office, we will ensure we have brought back the FA Cup in which the area zones to the PSL will compete.”