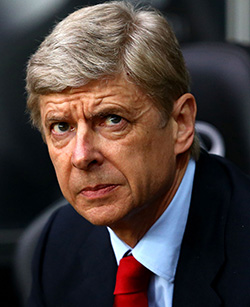 LONDON: Arsene Wenger has slammed suggestions Arsenal’s FA Cup fate will have an impact when he decides his Gunners future.
Wenger’s side face Manchester City in the FA Cup semifinals at Wembley on Sunday with the Gunners boss yet to reveal if he will extend his 21-year stay with the north London club.
With Wenger enduring constant calls for his resignation from furious Arsenal fans, it has been claimed a limp exit from the FA Cup might convince the Frenchman to quit when his contract expires at the end of the season.
The north Londoners have once again failed to mount a challenge for the Premier League title and suffered an embarrassing Champions League last 16 thrashing by Bayern Munich.
With Wenger’s record of qualifying for the Champions League for the last 19 years under severe threat this season, lifting the FA Cup might be the only way to salvage a wretched campaign.
But, asked on Thursday if winning the Cup for a seventh time would have a bearing on his future, Wenger said: “It doesn’t play any part in that.
“The FA Cup is a very important game for me because it’s the next game and because it’s an opportunity, as I just told you, to win a trophy this season. So of course we are all fully focused on that. My future is Sunday.
“What I expect when you go into a semifinal is to go to the final. I think somebody told me that I had played 10 semifinals in the FA Cup, so that means it’s a great experience and it’s always something special.
“I remember my first one, we just spoke about it, when we played at Villa Park against Wolves. That’s the day when I realised how big the club is, how much it means to our supporters.
“It is a special experience and, for us, I think we are focused, highly motivated.
“Maybe not at the maximum of our confidence because we had recently some disappointing results, but that is a good opportunity to show we are ready for a fight and how much we want to go to the final.
“Because it’s maybe our only opportunity to get a trophy this season.”
Even if they win the Cup, failure to qualify for the Champions League qualification would taint any Wembley celebrations.
But Wenger insists Arsenal, currently seven points adrift of the top four, are not in a position where they have to start prioritising the FA Cup over the league yet.Advertisement

“You don’t think about it like that because we don’t have to make a choice,” he said.
“We are not in a position where you can make a choice, do we choose this or do we choose that? The next game is the semi-final of the FA Cup, so we have to give absolutely everything to go to the final.