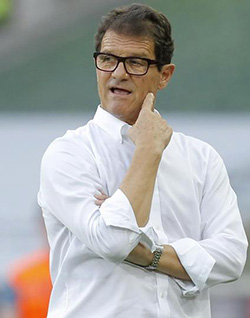 FORMER England and Real Madrid coach Fabio Capello has been sacked by Russia after a poor run of results in qualifying for Euro 2016.
The Russian Football Union (RFU) said on Tuesday it had ended its contract with national team coach Fabio Capello, three years before the country hosts the 2018 World Cup finals.
It did not immediately name a successor for the 69-year-old Italian though local media have quoted sources as saying CSKA Moscow coach Leonid Slutski is likely to take over.
“The Russian Football Union and the head coach of Russia’s national team, Fabio Capello, have reached an agreement to terminate the employment contract by mutual agreement,” the RFU said on its website.
Capello, who managed England at the 2010 World Cup, took over as Russia coach in July 2012 and had extended his contract until the end of the 2018 tournament.
He took the team to the World Cup finals in Brazil last summer but Capello’s side were knocked out in the group stages.
The team’s form has not improved since then and they suffered a disappointing 1-0 loss at home to Austria in their Euro 2016 qualifier on June 14, leaving them third in Group G with eight points from six games.
The RFU had been holding talks with Capello over his contract since late June. Russian sport news agency R-Sport on Tuesday put the level of the compensation at 930 million roubles (£10.55m)
Nikita Simonyan, the RFU’s acting president, said last week that all debts owed to Capello until the end of the 2014/15 season had been paid off.Advertisement