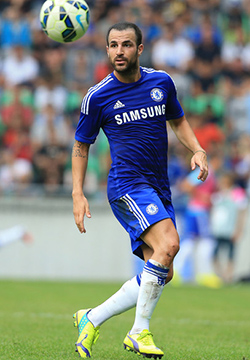 CHELSEA interim manager Guus Hiddink dismissed reports that midfielder Cesc Fabregas will be leaving the club during the January transfer window.
The Spain international has failed to rediscover the form he displayed in his stellar debut season with the Blues, with the 28-year-old registering 19 assists as Chelsea comfortably won the Premier League title.
Fabregas, who has failed to score in the 18 league appearances this season, has been linked with a move to Italian sides Juventus and Inter Milan amid reports Hiddink favours a more defensive shape to his midfield.
“We need all the players here until the end of the season. Chelsea are still in a position where we have to improve to get up the table, so we need all our players at the moment,” Hiddink told reporters on Wednesday ahead of Sunday’s league clash with fifth-placed Crystal Palace.
“So we don’t talk about the rumours. Cesc is coming in with a smile, which is what I always like. Players come in with a smile and not a worn out face.”
Chelsea have offered Montreal Impact’s Didier Drogba a position on the team’s coaching staff and have held talks with Montreal over the former Blues striker.
However, Hiddink said there was no change in the situation regarding the Ivorian taking up the role.
“Didier is that rare kind of former player with big status who would be very good for any club to have, especially him because he’s a Chelsea legend,” Hiddink said.
“But he has a contract with Montreal at the moment, and we have to respect that also.”Advertisement