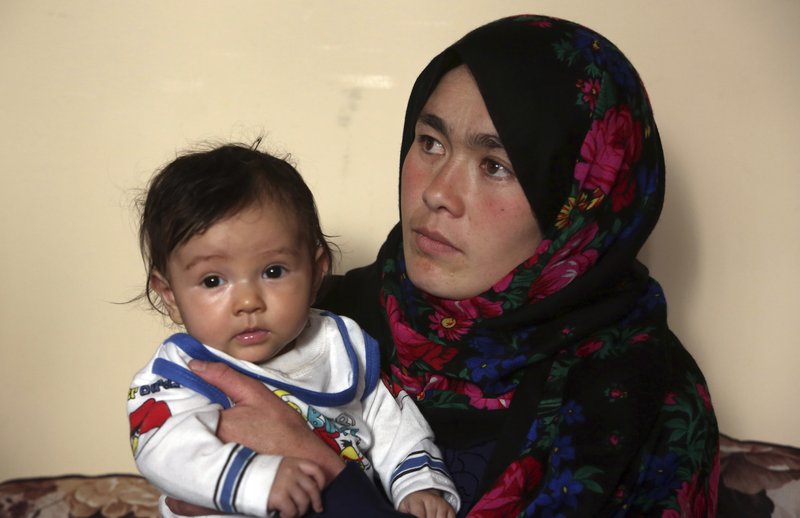 KABUL, Afghanistan (AP) — With three children under the age of five and a husband who could neither read nor write, 25-year-old Jahantap Ahmadi dreamed of going to college. Her high school degree was enough to become a teacher at the only elementary school in her village in central Afghanistan __ in an open field — but she wanted more.

On March 15, cheered on by her husband, Jahantap set out for the Daikundi provincial capital of Nili to take the university entrance exam. She walked until her feet were blistered and bruised and then sat for 10 hours with her infant daughter, Khezran, cradled on her lap in a rickety bus over rugged rocky roads. Once in Nili, she took the exam and scored a respectable 152 out of a possible 200.

But it was a picture of Jahantap posted on Facebook, sitting cross-legged on the classroom floor, her 2-month-old baby asleep on her lap as she took the exam, that made the dream of going to college come true. A teacher in Nili who was moved by Jahantap’s determination to get an education posted pictures on Facebook. In Afghanistan, where women still struggle for even the most basic of rights, it went viral.

“My brother who was working in Kabul called me and said ‘I saw your picture in Facebook,’” she said in an interview in Kabul where she is now enrolled at a private university. “I wanted to get my education, so I could help my village, change my village. I want to help my society. But first I wanted it for my children, so one day they could be educated.”

Nearly 17 years after the overthrow of the Taliban government, which outlawed women’s education, an estimated 6 million children are in school in Afghanistan and a third of them are girls. However, most girls don’t study beyond elementary school, and of the 3.5 million Afghan children who have never gone to school, 75 percent are girls, according to the 2017 annual report of the United Nations Children’s Fund, which was released in February.

Zahra Yagana, who runs a small non-governmental organization that provides awareness of the environment and the value of education, said the picture of Jahantap on the floor, while other students sat at desks, inspired her to get Jahantap to Kabul and into a university.

“Life is still very difficult for women in Afghanistan. We need the international community to stay for 50 or 100 years to change things here for women,” said Yagana.

“When I saw the picture of Jahantap on Facebook, I was so impressed,” she said. “Right away the next day I wrote a story about her, but I thought we have to do something for her, help her get her education. She inspired me.”

Yagana went to the government and recruited Farkhunda Zahra Naderi, a senior adviser to President Ashraf Ghani, as well as Sarwar Danish, a vice president. Naderi is paying Jahantap’s university tuition and Danish will pay the rent on the family’s home in Kabul.

“They said she is a symbol for women and education,” said Yagana.

In a country that remains deeply conservative and patriarchal, Jahantap’s husband, Musa Mohammadi, would seem an anomaly.

“I am so proud of my wife,” said Mohammadi, who never attended school and is illiterate.

“That’s not the life I want for my children,” he said. “I see a sign on the road and I can’t read it. I go to the pharmacy to get medicine, but I can’t read the name of the pills. That’s not right. It is very difficult for me.”

Before taking her entrance exams in March, Mohammadi said his wife taught children in the open field beneath the blistering summer sun. “I saw how many people wanted education. They all brought their children for her to teach.”

His uncle, Mohammad Reza Hesani, said when Jahantap married Mohammadi she bought pens and books for the children in her new husband’s family, most of whom had never been to school.

“Jahantap has given light to the women in our village,” said Hesani. “We respect her. My wife is so interested now in going to school after she saw Jahantap.”

Still, there’s a lingering fear that any peace deal with the Taliban would set back the fragile gains made over the last 17 years. Already, women’s rights groups have assailed Ghani’s government for failing to pass legislation to protect women and allowing clerics to rail against rights for women, stalling the little progress made thus far.

Masuda Karokhi, a member of parliament, told The Associated Press she is “tired and disappointed” that each time legislators press for laws to advance the rights of women, including a law to eliminate violence against women, conservative members intervene to delay it. She said the government panders to those members at the expense of women’s rights.

“Why is it that if a woman laughs, these conservative men say there is something in Shariah (Islamic law) that says it is wrong, but men can do anything and there is nothing in Shariah against them,” Karokhi said. “It’s so disappointing and frustrating, the attitudes of men in Afghanistan.”