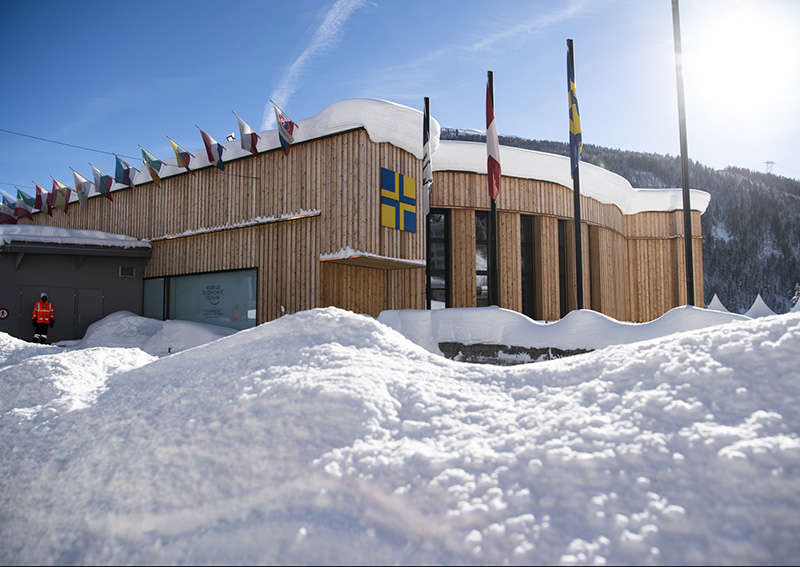 The congress centre, venue for the World Economic Forum, is covered with snow in Davos, Switzerland
Spread This News

DAVOS, Switzerland: As the world’s financial and political elites convene here in the Swiss Alps for the World Economic Forum, their vision of ever-closer commercial and political ties is under attack — and the economic outlook is darkening.

Britain’s political system has been thrown into chaos as the country negotiates a messy divorce from the European Union.

Under President Donald Trump, the United States is imposing trade sanctions on friend and foe alike, and the government is paralyzed by a partial shutdown over immigration policy that forced Trump and a high-level U.S. delegation to cancel the trip to Davos.

A year after getting a standing ovation from the elites at Davos, French President Emmanuel Macron is sinking in the polls as he contends with “yellow vest” protesters who have taken to the streets to call for higher wages and fairer pensions. Nationalist political movements are gaining strength across Europe.

And the economic backdrop is worrying: experts are downgrading their forecasts for global growth this year amid rising interest rates and tensions over trade.

“Judging by the state of the world right now 10 years on from the financial crisis, and the dysfunctional state of global politics I would suggest that these annual events have achieved the sum total of diddly squat,” said Michael Hewson, chief market analyst at CMC Markets UK.

The collective worries have sent a shudder through global financial markets: The Dow Jones industrial average is down nearly 9 percent from Oct. 3.

David Dollar, a senior fellow at the Brookings Institute, said the buckling market “represents a lot of anxiety that we’re seeing from the corporate elite who meet at Davos.”

How times have changed.

For most of the past quarter century, the worldview symbolised by the World Economic Forum — of ever-freer world trade and closer ties between countries — had dominated. Then came a backlash from Americans and Europeans whose jobs were threatened by low-wage competition from countries like China and who felt alienated at home by wealth inequality and immigration.

In 2016, U.S. voters elected Trump, who advocated restricting immigration and scaling back free trade, and the British chose to leave the EU.

“The winners from globalisation have had the megaphone,” said Paul Sheard, a senior fellow at the Mossavar-Rahmani Center for Business and Government at Harvard University’s Kennedy School. “The losers have been somewhat silent, but now are starting to express themselves through the ballot box and through the political process.”

The Davos confab has always been vulnerable to snark: hedge fund billionaires flying into Davos in fuel-guzzling private jets to discuss the threat of climate change; millionaire CEOs discussing inequality while downing cocktails; endless conversations between people who describe themselves as “thought leaders.”

First among them, perhaps, is WEF founder Klaus Schwab. In an interview Sunday, he stressed the need for more global, “forward-looking” cooperation and a “human-centred” approach to technology as populism feeds on fears of a possible economic downturn in many parts of the globe.

Globalization produced millions of “winners” over the years, but also “has left certain people behind,” Schwab said at the Davos conference center, where his teams gave pre-event tours to delegations ahead of the formal start on Tuesday.

“In the age of social media, you cannot afford any more to leave anyone behind,” he said.

That’s just for corporate chieftains. Civil society, non-governmental groups, U.N. leaders and governmental officials don’t pay: They get in free. Lodging during high-rent Davos week, however, is another matter.

Although Davos is seen as a redoubt for global elites, populists have come, too. Trump got a polite reception when he showed up in 2018, and he had planned to come again this year before the shutdown intervened. Brazil’s newly installed president, the populist Jair Bolsonaro, will attend this year.

Even with some key Western leaders missing, organizers say a record 300 government ministers and nearly 60 heads of state or government including German Chancellor Angela Merkel and Prime Minister Shinzo Abe of Japan will attend. About 3,000 people attendees overall are expected this week.

Davos serves as a global stage for world leaders and executives, and the conference center transforms into a warren of public and private meetings. Executives talk possible deals. Government leaders either meet and greet each other or seek to iron out differences — mostly quietly. Academics and chiefs of non-governmental groups speak out in webcast panel sessions or comb corridors looking to rub elbows with decision-makers.

“They make the trek up to Davos, yes, to drink champagne and to wheel and deal and everything else,” said Sheard, who participates in WEF projects. “But there is sort of an attempt at purification and thinking, ‘We need to do a better job.’”

Gabriel Sterne, head of global macro research at Oxford Economics, argues that top economic decision-makers have much to atone for.

In a report this month, Sterne noted that most major economies performed dramatically worse than expected after the 2007-2009 Great Recession. He blames many central banks — besides the U.S. Federal Reserve — for not responding to sluggish growth more aggressively with easy money policies. And, Sterne says, politicians should have juiced growth with tax cuts and higher government spending.

“There was genuine underperformance by the big institutions,” he said. The result is a populist backlash. “If you don’t do anything about your failings, they can come back and bite you.”

Sterne worries that the populist response “could trigger radical and ill-conceived” policies that overshoot and drive up inflation and swell government budget deficits.

The ride could get even bumpier. The World Economic Forum is focusing on what it calls the “Fourth Industrial Revolution” — a series of rapid advances in technology and medicine expected to transform society. Advances in robotics and artificial intelligence could further threaten jobs and feed the populist revolt.

“We seem to be on the cusp of an incredible new era of automation and critical breakthroughs in health sciences,” Sheard said. “But how do we manage this process? And how do we manage it in a way that doesn’t leave millions of people behind?”