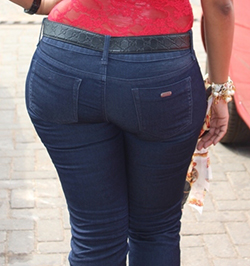 ZIMBABWE’S vaunted Look-East policy is turning out to be a boon, not just for the country’s struggling economy, but for Harare ladies keen on the Nicky Minaj look – those feeling their bottoms and hips could do with a bit of a boost.
So much for Shakira’s claim that ‘Hips don’t lie’!
In a bid to please their partners, some local women have risked cancer by using herbs to ‘tighten’ their privates while others say they have discovered another use for the female condom, claiming the contraceptive can also remove facial black spots.
Now, and inspired in part by a belief that men prefer ladies with fuller figures, some women have looked to China for a sleight of the butt as it were; it’s all about looking and feeling good.
Chinese hip and butt padding – some of it inflatable – has become a hit in Harare with enthusiasts paying between $20 and £50, depending on size, for the products.
A woman who frequents China to import the products said they have proved popular with ladies who want to give their bottoms and hips a bit of a lift.
“Please, I won’t allow you to take the pictures and publish this,” she told this reporter, asking to be referred only as Molly.
“You want to push us out of business munyika yakaoma kudaro and you want our sisters to lose their newly found lover. Varume handiti munoda vasikana vakabatana.”
Molly assured customers that the inflatable versions come with a guarantee that they would not deflate or succumb to pressure, an assurance that is however, difficult to ascertain since the instructions are in Chinese.
According to Molly, the products have long been available in hair dressing salons but were too expensive and beyond the reach of many.
But the Look-East policy has brought in cheaper versions from China.
Asked about the risk of embarrassment should their partners discover their trick, one user said that dreadful possibility was the reason she played hard to get and delayed, as long as possible, getting intimate.
If the gentleman friend starts pressing too much, that is the signal to move on to pleasures anew, she said.
“I have been using it (padding) for two months,” said a woman who refused to be named.
“I have not given my new boyfriend a chance to make love because what is most important is money for me to take care of my child who is going to pre-school.Advertisement

“I tell him that I have been used by men who are just after sex and that as soon as they get it they dump me. So I have told him it will not happen until he has proved to my satisfaction that he loves me.”
But men who spoke NewZimbabwe.com felt Zimbabwean women were going too far.
“Love is not blind … so one may think she is fooling men but she is actually fooling herself,” said Max.
“It’s common knowledge that beauty is in the eyes of the beholder but we probably need to add a cautionary note here; for some cases, what you see is clearly not what you will get,” added Joseph.