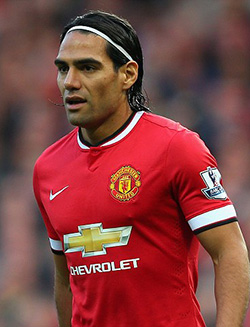 MANCHESTER United’s on-loan striker Radamel Falcao has hinted he could leave the club at the end of the season in search of more regular football, but said he was still committed to the Old Trafford club.
Colombia forward Falcao missed last year’s World Cup through injury then moved on loan from Monaco to United where he has seen limited first-team action and scored few goals under manager Louis van Gaal.
“I think any footballer needs to play and is happy playing. I’m totally committed to the club, there are eight matches to go (in the Premier League) and anything can happen,” Falcao told Colombia’s Radio Caracol.
“So when the championship ends surely I’ll sit down, do an analysis and decide what’s best for me,” added the 29-year-old, who was a prolific scorer for Porto, Atletico Madrid and Monaco before his knee ligament injury 14 months ago.
“Obviously I need to find a place where I have continuity and can play,” Falcao said in Bahrain, where Colombia play a Copa America warm-up friendly on Thursday.Advertisement