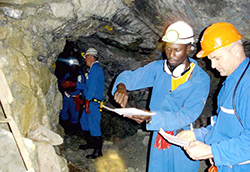 LISTED resources group Falcon Gold could close operations because of poor commodity prices and is struggling to attract buyers for its mothballed Dalny Mine because of poor investor appetite for Zimbabwe, an official has said.
Gold prices have fallen to the current $1,170 per ounce from the $1, 502/oz in 2013 and New Dawn president and chief executive, Ian Saunders told shareholders at Falgold’s annual general meeting in Bulawayo last Friday that the company could not survive in the current environment.
“There is a serious doubt the company’s ability to survive as it is currently configured. Accordingly, the company may be forced to consider shutting down its remaining operations, either temporarily or permanently. There is need to be a shift in gold price, otherwise it’s a very bleak future,” he said.
Saunders said the company would only become profitable if there was a change to the tax laws and power cost base.
Falgold requires $1,3 million to upgrade equipment at its Golden Quarry Mine in Shurugwi which would increase its output by up to 50 percent.
Saunders also said there were no takers for Dalny Mine since London-based African Consolidated Resources (AFCR), which has been renamed Vast Resources, pulled out of a deal to buy it last year after failing to raise the $12 million required.
AFCR paid $500,000 of the initial payment of $1 million, but failed to raise enough money to complete the deal by end of September last year as per agreement.
“We are still to bring investment into Dalny Mine. As the management, we have been looking around for potential investors but to no avail due to the absence of investor appetite for Zimbabwe,” said Saunders.
Falgold reported a net loss of $1, 8 million for the full-year to September 30 in 2014, compared to a $12, 5 million loss in the prior year, on the back of depressed gold prices and costs of maintaining Dalny Mine.
The mine, which consists of more than 3,500 claims was closed in August 2013 and placed under care and maintenance due to falling gold prices and operational challenges such as high power costs that accounted for 45 percent of the company’s budget.
It placed its more than 900 workers on unpaid leave.
Canada-listed junior miner New Dawn has an 85 percent controlling shareholding in Falgold.Advertisement

Falgold also owns Turk Mine near Bulawayo and Venice Mine in Kadoma.