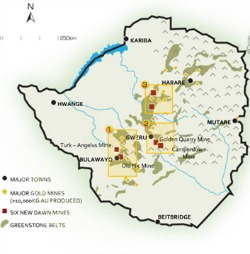 JUNIOR gold miner Falcon Gold Zimbabwe says cash from the sale of its Dalny Mine to African Consolidated Resources (AFCR) will breathe life into its operations, with the payment expected next month.
“We are waiting for the transaction itself to go through and payment. We hope it will happen sometime early to late October. It allows us to fundamentally change the liquidity situation – the balance sheet of the business,” New Dawn president and chief executive, Ian Saunders told The Source on Friday.
Last month, Falgold shareholders approved the disposal of Dalny Mine, situated near Kadoma to London-based AFCR.
Falgold, which is 84,7 percent owned by Canadian-listed New Dawn Mining Corporation, closed Dalny in August last year and placed it under care and maintenance, citing liquidity problems triggered by falling gold prices and operational challenges such as high power and labour costs.
The mine placed its over 900 workers on unpaid leave.
Falgold’s losses narrowed to $1, 6 million for the six months ended March 31 from $2, 6 million in the prior year after shutting down Dalny Mine. Losses for the period under review included care and maintenance costs at the mine which amounted to $774,000.
Saunders said the company would also refurbish parts of its Golden Quarry mine through debt financing at a cost of around $1,5 million and increase production to about 40 to 45 percent.
At Turk Mine he said a new shaft would be commissioned in the next seven to 10 days and will see production tripling.
“The work we have done over the last two to three years is coming to the fore and we hope to see an improvement of the margins because in the absence of policy changes or gold price changes we have to change the output,” he said.
On the fiscal policy statement presented by finance minster, Patrick Chinamasa on Thursday, Saunders said the incentives for the gold sector would boost production although prices dropped by five percent in the last two weeks.
“We are pleased as gold producers that we saw some relief in the royalty rate from seven percent to five percent,” he said.
He said there was need to address the power challenges and the pricing structure.Advertisement