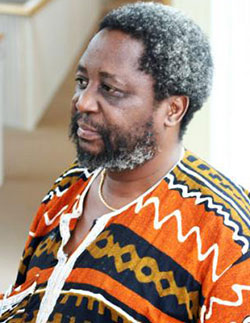 DOZENS of local artists converged at a Harare venue Saturday evening for the memorial of respected poet and novelist Chenjerai Hove who died in exile in Norway July 12 last year.
The event, marked by music, poetry and testimonials from friends and family of the late arts icon, was organised by local artistes in collaboration with his family.
Top poet and once close friend to Hove, Chirikure Chirikure said the event was to celebrate Hove’s local and international contributions to the arts world.
“We are celebrating our brother, his life, his achievements,” he said.
“He left us a legacy. We talk of so many things in the country but tend to forget that the bedrock of any nation is arts and culture.”
Arts guru Daves Guzha said Hove “contributed extensively to the literal world not just in Zimbabwe but at global level”.
StarFM presenter Jabulani “J Boss” Hove, son to the late essayist, said although his father raised him under a proper home, he started knowing him better through tributes given to him by his peers in the arts industry.
“We are thankful that the man came into our lives, gave life to me and then you see all these people telling you certain things you never knew about your own father and then you say to yourself, oh no wonder why he never gave me his full attention because he was all sorts of things to many people,” said the younger Hove.
The outspoken Chenjerai Hove left the country 2001 for Norway 2001 after harassment from the authorities.
He succumbed to liver failure at the age of 59 and was later buried in his homeland.
Even in exile, he still wrote against continued injustices in Zimbabwe.
However, asked if they were not letting the author down by failing to highlight through their works, the myriad injustices under the current political regime, Amakhosi arts entrepreneur Cont Mhlanga said everyone was truthful with the current situation.
“Artists express themselves out, they express themselves frankly, but, like what Chenjerai was, artists are not political activists, they speak through their work,” he said.
Zimbabwe Artists for Human Rights’ Shoes Lambada said mainstream artists shied away from politics because “they are so much absorbed in the fame and also in the income” and feared being denied airplay to the detriment of their livelihoods.Advertisement

Promising mbira music crooner Hope Masike was among the artists who
provided entertainment during the memorial of the award winning novelist.