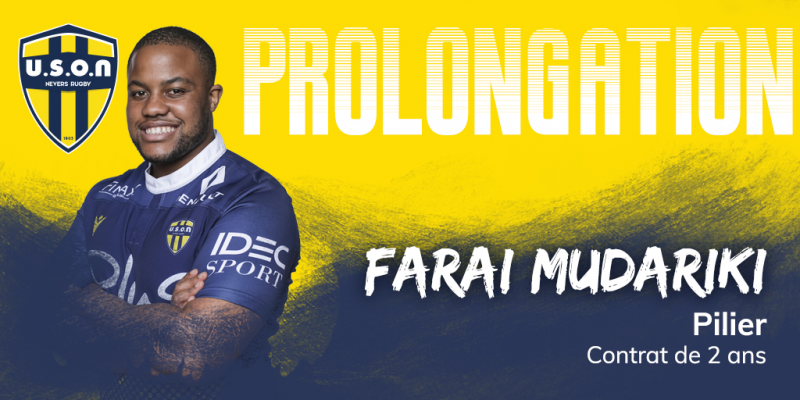 The 26-year-old tighthead prop initially joined the Pro D2 club on a short-term contract in March in an effort to get some competitive game time after parting ways with English top tier side Worcester Warriors last November at the expiry of his contract.

After impressing the USO Nevers during his two-month stint, Mudariki has been rewarded with a two-year contract which will see him remain at the club until June 2023.

“The USON Nevers Rugby club announces the extension of Farai Mudariki for two more years. The 26-year-old tighthead prop (1,84m and 114kg) has played 5 games this season with Nevers,” the club said.

Mudariki is not new to French rugby having spent two years on the academy roster of Top 14 club Olympique Castres and also a stint at French third-tier side Tarbes Pyrénées Rugby in 2018.

The new long-term contract is a big boost for Mudariki after he endured a difficult two-year spell in England during his time at Worcester Warriors due to injuries.

He will be hoping to use the move as an opportunity to navigate his way back to the top echelons of professional rugby.

Mudariki’s long-term contract in France will be good news to Zimbabwe coach Brendan Dawson as the gifted front-rower is a key member of the Sables side, which is aiming to qualify for the 2023 World Cup to be played in France.

He made his international debut as a 19-year old against Madagascar in a 2015 Rugby World Cup qualifier held in the island nation. He was one of the try-scorers when Zimbabwe thumped Madagascar 57-22.

His most recent appearance was in August 2018 against Tunisia in the Rugby Africa Gold Cup, a qualifying game for the 2019 World Cup.